From 1907 through the 1960s, Shinola was synonymous with shoe polish. 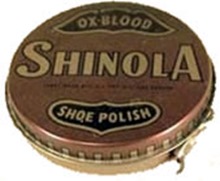 Now there’s a new Shinola: a Detroit-based company that makes watches, bicycles, leather goods, and journals. Here’s the full-page ad that appeared on Page A-5 of the New York Times on July 23, 2013: 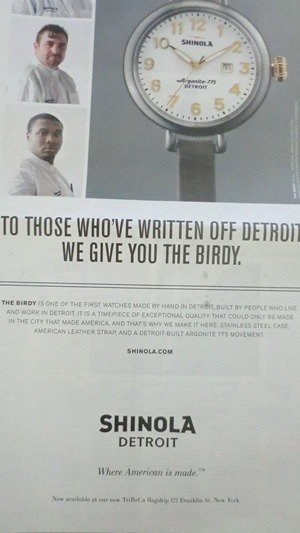 “To those who’ve written off Detroit, we give you the Birdy”— a “timepiece of exceptional quality that could only be made in the city that made America, and that’s why we make it here.” As pictured: $525.*

How did shoe-polish Shinola become luxury-goods** Shinola? First, the original trademarks expired in the mid-1980s. Then a completely unrelated company—Dallas-based Bedrock Brands, started by the founder of the accessories company Fossil—began planning a new line of American-made leather goods.

Fast Company’s Co.Design blog picked up the story from there in a November 2012 post:

In Bedrock’s eyes, the new company would be a throwback to a time when goods were built to last, when customers weighed price points with quality, and, most importantly, when those customers had an interest in who was building the products—and where.

“We didn’t want to try to invent a name that had heritage and pretend there was history behind it,” COO Heath Carr says, so they looked for inactive brands that were on the market. They eventually came across Shinola, along with the “ever-so-famous saying that comes with the name,” Carr says.

To younger Americans, “Shinola” may carry no brand resonance. “I always thought shinola [sic] was a slang word,” confessed the author of the You Remember That blog.

In the early years of the 20th century, when Shinola was introduced, -ola brands like Victrola, Pianola, and Crayola were almost as popular as -ly brands are today. (More recently and, in my opinion, less successfully, we’ve seen Brayola.) “Doesn’t know shit from Shinola” came along during World War II as “barrack room vulgarity,” according to The Phrase Finder, which defines the idiom as “possessing poor judgment or knowledge.” Synonyms from the same era include “doesn’t know whether to scratch his watch or wind his ass”—surprisingly germane for Shinola’s new incarnation, although the concept of watch-winding may be unfamiliar to anyone under, say, 50.

The tagline of the new Shinola—“Where American is made”—is also noteworthy. It’s yet another example of commercial anthimeria (the substitution of one part of speech for another, especially in slogans)—in this case, the nounification of a modifier. It’s a popular trend right now: see “Maximum more for your moolah,” “Step into awesome,” “Just add good,” et al.

It’s rare but not unheard of for a once-celebrated dead brand to be revived by an unrelated business. One of the most famous examples of a recycled name is MySpace; a more obscure second-life brand is doubleTwist, which was a bioinformatics company during the first tech boom and is now a music-synchronization service.

* The deeply indebted city of Detroit filed for bankruptcy last week. And The Birdy puns on “the bird,” the upraised middle finger.

Posted at 06:14 AM in Advertising, Anthimeria, History, How They Got That Name, Naming, Retail, Slogans and Taglines, Trademark | Permalink