Good news for “Downton Abbey” fans: your favorite posh soap opera will soon be an actual soap (and related beauty products). Bad news for American fans: the 10-piece collection will be sold only at not-particularly-posh Marks and Spencer in the UK. Each package is adorned with an apposite quote from one of the episodes. (Via The Beheld.) 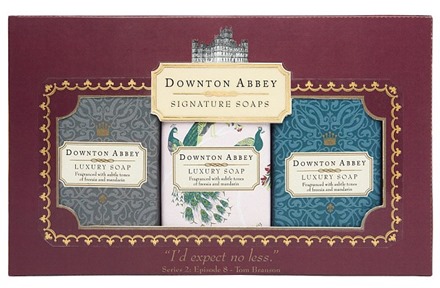 Fun with words: Who or what is the “peter” in “peter out”?

May the farce be with you: William Shakespeare’s Star Wars (“In time so long ago begins our play, / in star-crossed galaxy far, far away”) and  Star Wars: Vader’s Little Princess. 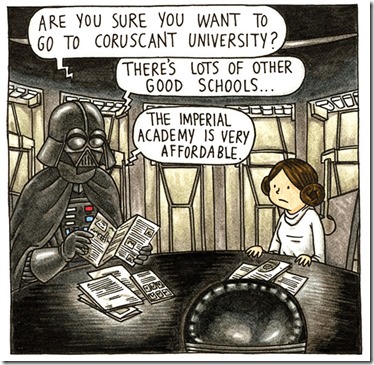 “Congressional acronym abuse: An overly in-depth analysis of congressional acronym usage in bill names.” A tidbit: “Some acronyms are more popular than others. The most popular word, SAFE, is used 131 times.” See also Ben Zimmer’s May 2012 column on the “backronym of the week: Ex-PATRIOT Act.”

Do Apple’s new ads signal a renaissance for long copy? “Sadly, but definitely, not. The copy is dire. Vacuous, boring, self-regarding and counter-productive. It starts with a glimmer of promise – the point about designing things with the user in mind – but then goes precisely nowhere with it.” (Via Deborah Schneider.)

Arika Okrent on the phonetic pitfalls of shm- reduplication: “‘Confusion, shmonfusion’ or ‘confusion, conshmusion’? Do you let your shm- wander, or make it stay up front where you can keep an eye on it?” (See also my posts on shmeat, Schmap, Libros Schmibros, and Burglar Schmurglar.)

What not to name the baby, San Francisco version. Tips for techies: “You have the added handicap of being in a field where naming products comes up all the time. You probably even think you're good at it. Unfortunately for fetuses, there is a pretty big difference between names that would be appropriate for a baby and names appropriate for a wearable pedometer.” (Via Nancy’s Baby Names.)

Speaking of babies, Neil Whitman was recently baffled by a product called Babiators: “All at once, not only did I have to infer the existence of aviators as a noun referring to a kind of eyewear instead of a group of airplane pilots; I also had to take it in as part of an offensively cute portmanteau word, in a display for a product that shouldn’t even exist.”

"Babiators" sounds like it might also be a device to keep babies warm.
Or slang, past tense (plural) for pedophages.