« The Changing Names of California's Freeways | Main | In the Wild: Slushify »

Word of the Week: Creepers 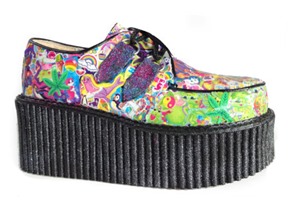 The Smithsonian blog Threaded traces the history of “creepers” to a 1953 name-of-the-dance hit song, “The Creep,” recorded by British big-band leader Ken Mackintosh. “A slow shuffle movement, it was embraced by a subculture called the Teddy Boys, who became known as creepers”:

In addition to distinguishing themselves by their musical preferences, Teddy Boys made themselves known through their dandy-like sartorial choices that referenced the early 20th century. A popular look included drainpipe pants with exposed socks, tailored drapey jackets, button-down shirts, brogues, Oxfords or crepe-soled shoes. Those ridged, thick-crepe-soled shoes with suede or leather uppers became known as “creepers”  because of their association with the Creep dance (and maybe because if you misspelled crepe, you got creep?).

Maybe, but crepe (or crêpe) and creep are unrelated etymologically. Crepe comes via French from a Latin root meaning “curled.” (Yes, it’s the same word whether you’re talking about a thin pancake, crinkly paper, or rubber with a corrugated surface. Because of the crumpled look of its petals, crape myrtle is related, too.) Creep comes from Old English créopan, which meant pretty much what it does today: “To move with the body prone and close to the ground, as a short-legged reptile, an insect, a quadruped moving stealthily, a human being on hands and feet, or in a crouching posture.” (OED)

Creepers’ popularity declined in the 1960s but re-emerged during the punk scene of the 1970s. They’re back again in exaggerated styles similar to the flatforms of several seasons ago.

Retailer Urban Outfitters currently sells 37 styles of creepers on its website – all for women, interestingly. One brand, T.U.K., based in Poway, California, accounts for about 40 percent of them. 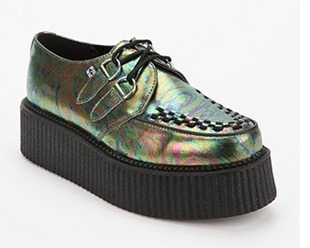 T.U.K. Oil Slick Mondo Creeper. The company was founded by a Brit who originally named it Tredair United Kingdom.

Footwear footnote: Sneakers or sneaks to mean “soft-soled footwear” is very similar in connotation to creepers but much older. According to the OED, sneaks was used in this sense at least as early as 1862 (“The night~officer is generally accustomed to wear a species of India~rubber shoes or goloshes on her feet. These are termed ‘sneaks’ by the women [of Brixton Prison]”. Sneakers is classified as “orig. and chiefly U.S.”; the earliest citation is from an 1895 edition of Funk’s Standard Dictionary of the English Language. In 1900 the American humorist George Ade wrote in More Fables: “His Job on this Earth was to put on a pair of Pneumatic Sneakers every Morning and go out and investigate Other People's Affairs.”

Posted at 07:26 AM in Etymology, History, Music, Shoes, Word of the Week | Permalink