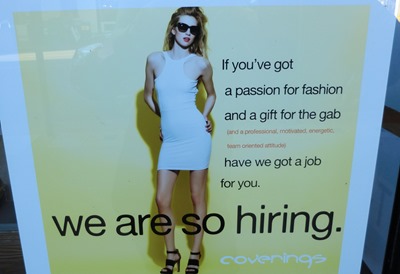 “We are so hiring.”  The small red type reads: “(and a professional, motivated, energetic, team oriented attitude).”

It’s not just the photo that tells you that the target market is young and female. It’s also that little word “so” – and, more to the point, the way it functions as a verb-intensifier.

So+verb is new enough that it doesn’t have a fixed name. I’m calling it Shopgirl So because of the retail association here, but in a November 2011 blog post linguist Arnold Zwicky called it GenX So (“named that for its spread in people from Generation X”). An undated and equally scholarly post at Yale Grammatical Diversity Project calls it Drama SO. (“So” is all caps to convey emphasis; according to YGDP, “In Drama SO constructions, so must receive the highest pitch accent in the sentence.”)

Or you could go back to the beginning and call it Clueless So, in acknowledgment of the movie of that name, released in 1995: “Oh thank you, Josh, I so need lessons from you on how to be cool.”

In fact the OED, in a 2005 addendum, gives that Clueless line as the earliest citation for so+verb (“definitely, decidedly. Freq. in negative constructions”). The construction also showed up in TV’s “Buffy the Vampire Slayer” as early as 1996 (“We so don’t have time”).

(“So” is a busy little syllable these days. I’ve written previously about “not so much” = “not at all” in advertising; see also Ben Yagoda in Lingua Franca, “So It Turns Out That Everyone’s Starting Sentences with ‘So’.”)

Intensifiers in general are often associated with the speech of girls and women, and so+verb is no exception, as all of the above examples suggest. Zwicky, however, says the connection may be spurious:

The stereotypical associations of GenX so are to young white women (in the U.S.), no doubt because of its prominence in the movies Heathers (1988) and Clueless (1994). Studies of actual usage (though admittedly small in scale) suggest that the actual association with women, while apparently real, is smaller than the stereotype would suggest; and as the GenXers have aged, they seem to have carried this usage with them, and it’s spread to many people not in GenX (like me).

The other line in the sign that caught my attention was the slightly unidiomatic “gift for the gab.” The standard idiom is “the gift of [the] gab” (“an ability to speak easily and confidently”), but that’s not my main gripe. I’m just not happy about “gab” in this context: call me old-fashioned, but I’d prefer that sales associates not “talk idly or incessantly, as about trivial matters” while on the job.

Note too the cheerleading for corporate passion in the ad.

Posted at 07:12 AM in Advertising, Grammar, Idioms, In the Wild, Passion, Retail, Signs, Slang | Permalink

I think I picked that up from the Buffyverse. (And I am so overusing it of late.)

Is this earlier connotation now passé?

Jack: Word on the street is that you are not hiring anymore.

Jill: We are so hiring!

So I had missed that Ben Yagoda article, but lately the use of "So" to begin an explanation seems to be EVERYWHERE. I've found myself using it in speech, emails, blog posts, etc. Oh, and apparently blog comments, too.

Notice that in so+verb, the verb is usually a present participle, which is effectively an adjective, very often.

I believe it all originates with so+adjective, from Johnny Carson's stock routine, as I explain here:

Boomers began the so+adjective, simply starting the routine without finishing it, and GenXers expanded it from there.

Mudge: According to the OED, so+adjective goes back to the ninth century. My Old English is rusty; the first entry I can competently read in that section (14a, if you're interested) is dated 1348: "The empire, that was so mighty..."

The more recent twist is so + past particple. The example that always pops into my mind is from "American Beauty" (1999). A deadpan, pre-Hairspray Marissa Jaret Winokur, as Mr. Smiley's Senior Drive-Thru Manager Janine, drawls to Annette Bening: "Whoa! You are soooo busted."

Of course so+adjective is ancient. What I don't think is ancient is very frequent use of so+adjective without the "that..." clause that naturally follows it. That makes the "so" simply a substitute for "very".

The past participle in your example (a nice comic line) is being used as an adjective.

"Notice that in so+verb, the verb is usually a present participle, which is effectively an adjective, very often."

You've hit the nail on the head there and I think that's exactly why this expression actually works in English. In the progressive construction (verb be + present participle, our example being: "we are hiring") the present participle effectively acts as an adjective describing "what we are", i.e., we are hiring.

It's no great leap to intensify an adjectival "hiring" with the adverb "so".