F Is for Friday

Here’s Peet’s Coffee and Tea with Do You Give a Cup?, “the Internet’s first social sampling experiment.” 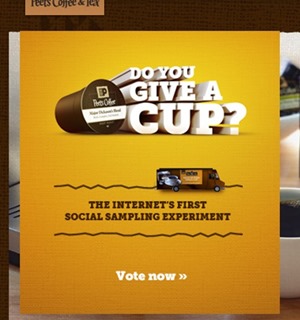 Given Peet’s Berkeley origins and normally high-minded, even reverential brand voice, I expected “social” here to mean “socially conscious”: I thought I’d be voting on microloans for women farmers in Ghana or clean water in Bangladesh. But no: the “vote” was yea or nay on zombies. Really, Peet’s? On the other hand, I suppose that when you start punning on “give a fuck,” you’ve left the Cult of Caffeine far behind.*

Rounding out the F trifecta is an announcement this week of CVNDSH, a new brand from British cycling star Mark Cavendish, known professionally by his surname only. He’s also known for his potty mouth, which is reflected in the tagline. 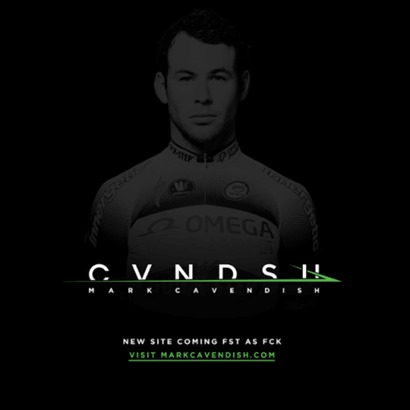 Yep, it’s another all-consonants brand name, in this case for bicycles and (maybe, someday) other products. “Removing the vowels from the identity is like removing parts of the bike—streamlining it as much as possible but making sure it still works,” said Sam Hodgson, creative director for the UK agency that did the brand design. “We wanted to create something that looked really pure.”

By the way, “FST AS FCK” may be for Eurozone eyes only: when I checked out CVNDSH.com, the line was the G-rated “New site coming soon.”

If you’re looking to point an accusatory finger, index or otherwise, here’s a likely culprit. 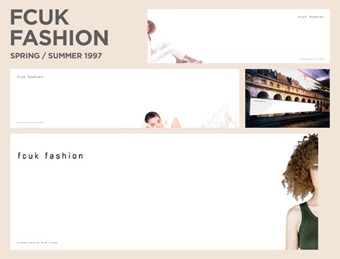 French Connection UK’s first use of “FCUK” in advertising, 1997.

FCUK is a short, sharp name to stand for French Connection United Kingdom and was being used on faxes between our offices in the UK and Hong Kong (FCHK) before being introduced across the company as a highly recognisable name and acronym to stand alongside the French Connection logo. 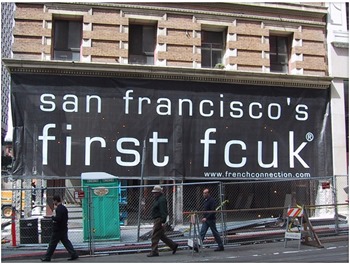 The American Family Association, a conservative Christian group, attempted to stop the US trademark registration of FCUK. The group was particularly exercised over a line of branded fragrances with names like FCUK HIM and FCUK HER.

(Not in the F troop but still funny – and boundary-pushing for 1997 – is this “Mr. Dumbass” spot for A&W root beer. Hat tip: Ben Trawick-Smith.)

* Here’s what I mean about Cult of Caffeine: Some years ago I did a series of writing projects for Peet’s that required my presence at company headquarters. I thought my hosts would be eager to offer me a cup of House Blend, if not something fancier, but none was forthcoming. When I asked whether coffee was available—the meeting was long; it was mid-afternoon; I was fading—I saw pained looks all around. Sighing heavily and clearly inconvenienced, one of my clients removed himself to the Coffee Shrine and slowly, very slowly made one cup of French-press coffee just for me. It’s not the Peet’s Way to keep coffee sitting around, I was told: every cup is made fresh.

Look, I can ride the Eff Train (nice, BTW!) with the best of them - I began my legal career in New York, after all, and idolize Julia Louis-Dreyfus's masterful explosions of profanity in "Veep." But all of these uses you've identified are just way too self-consciously edgy for me - smugly hinting at the true profanity because they CAN, not necessarily because it's the best ad campaign. (And I'VE apparently said this before too: http://blog.jessicastonelevy.com/search.aspx?q=effen&sc=tcon&dt=a&al=)

Jessica: "A fine line between stupid and clever," indeed.

Have you heard of the German beer called Fucking Hell? Here's a link: http://www.spiegel.de/international/zeitgeist/controversial-brand-name-german-firm-wins-right-to-make-beer-called-fucking-hell-a-686305.html

Pat: Yes, I've heard of it. It doesn't quite fit this category, because (a) Fucking is the real name of a real town in Austria, and (b) in English, this isn't near-profanity, it's actual profanity. But I agree that the same Beavis-and-Buttheadish impulse drives all these names. And once the smirking subsides, what does the brand do for an encore?