« On the Visual Thesaurus: The Ads We Deserve | Main | F Is for Friday »

Gevalia, the Swedish coffee company that’s owned by Kraft Foods, is promoting its new single-serve coffees with free samples. Here’s the front of the package in which my sample was mailed: 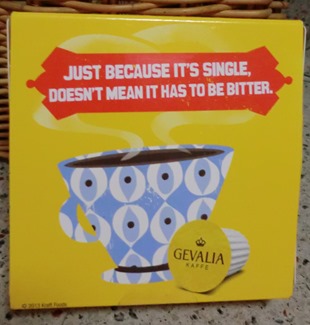 “Just because it’s single, doesn’t mean it has to be bitter.”

I like that line, but I don’t like the comma after “single.” The rule: “Don't put a comma after the main clause when a dependent (subordinate) clause follows it (except for cases of extreme contrast).”*

“Gevalia,” in case you were wondering, was the Latin name for Gävle (pronounced YAV-leh, roughly), the 500-year-old city on the Baltic Sea where the coffee company was founded, in 1853. Gevalia, the company, is pronounced with a soft G (dʒəˈvɑ : liə); it was family run until 1971, when it was bought by General Foods, a predecessor of Kraft Foods. Gevalia is the largest coffee roastery in Scandinavia, where it’s a supermarket brand; in North America, it was until recently positioned as a premium brand and sold only through home delivery. It’s now sold in major supermarkets.

* “I love that line, but not the comma after ‘single’” is an example of “extreme contrast.”

Posted at 06:11 AM in Food and Drink, How They Got That Name, Humor, Naming, Punctuation, Slogans and Taglines | Permalink