Word of the Week: Cheekini

Cheekini: A style of women’s underwear with moderate coverage in front and on the sides and a raised cut in the rear that covers some but not all of the buttock cheeks. 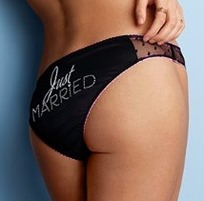 I first discovered cheekini on the Victoria’s Secret website, but the term is neither original nor exclusive to that retailer. JC Penney sells cheekini panties under its Flirtitude label; it also sells visually similar boykini panties and hipster panties. I also found cheekini panties by Steve Madden, Betsey Johnson, and Felina.

The earliest citation I found for cheekini is a July 2006 blog post, “Cheekini Is the New Thong!”, that credited DKNY with coining the term. However, a search for DKNY cheekini underwear came up empty-handed, or -cheeked, and all the images on that 2006 post have vanished.

I found the most extensive definition for cheekini in an unexpected place: a blog called He Wears Panties (“a friendly place to discuss lingerie and women’s clothing with men who wear it”):

Cheekini panties are clearly a play on the ‘bikini’. The general idea of the cheekini is that the rear of the panty is cut quite high across the buttock, leaving a fair amount of cheek showing whilst also reducing panty lines in the process. These are a viable alternative to thong lovers who are growing tired of feeling as if they have a never ending wedgie.

Cheekini is yet another variation on the linguistically productive bikini, which was adopted in 1946 as the name of a new French swimsuit as “explosive” as the nuclear-bomb tests that had recently taken place on Bikini Atoll in the Pacific Ocean.

Read my previous posts about -kini and -ini:

Posted at 08:17 AM in -ini, Fashion, Neologisms, Retail, Underwear, Word of the Week | Permalink