It’s Day Four of Underwear Week! Grab your passport and some loose loonies: we’re headed north of the border for today’s installment. 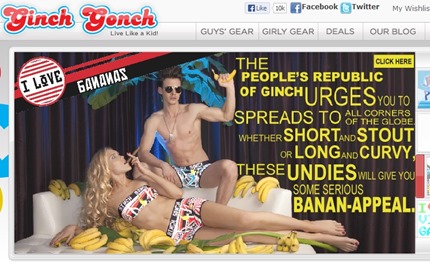 I stumbled upon undie-maker Ginch Gonch about six months ago. The name was a complete puzzle to me, the tagline (“Live Like a Kid!”) didn’t seem to clarify the odd words, and I got no help at all from the About page:

Ginch Gonch was born from the rebellion against the dull, colorless underwear endured by most people, and has quickly become one of the fastest growing premium lifestyle brands internationally. It was the first of its kind to successfully combine humor and sexuality with funky, fashion-forward designs, and has completely reinvented the underwear industry through the unconventional ways it sets the trend for the rear end.

What the website doesn’t have are clues about where the company’s located, other than a Montreal area code on the Contact page. The company boasts that its products are sold “in premium department stores and exclusive boutiques” in 22 world capitals, but I’m a pretty serious shopper and I can’t recall ever seeing them.

The Interwebs came to the rescue. Ginch and gonch, it turns out, are two ways to spell Canadian slang words meaning “underwear.” Here’s a definition from the CKA (Canada Kicks Ass) website:

gotch, ginch, gonch, gitch (From Ukrainian gatky/gatsi): refers to men’s brief-style underwear, particularly those that are threadbare. Used in British Columbia and Alberta. Gitch and gotch are variants heard mostly in Saskatchwan. It is also acceptable to append ‘ies’ to any of these variants, especially when referring to the underwear of male children. eg: “Make sure you do laundry tonight, I’m going to need some clean gonch in the morning”. The term is becoming more widespread in use as a result of the rise in popularity of Vancouver-based undergarment company GinchGonch. A “gotch-pull” or “gonch-pull” is another name for a wedgie.

So—Vancouver, not Montreal? The Internet is silent on the discrepancy. But I was definitely warming to the name: it’s fun to say, relevant (if you’re from British Columbia or Alberta), and memorable.

Apparently, though, if you’re not from British Columbia or Alberta you may be as clueless as I was about ginch and its relatives. Here’s a question posted on Yahoo Answers in 2008:

“Ginch Gonch” is a Canadian underwear company, and they say their name comes from the canadian slang word(s) for underwear “ginch / gonch”
now, i'm Canadian, but i’ve never heard the term before... how common is the slang?

And the answer, seemingly from another Canadian:

Gitch and Gotch are words that i am familiar with -- both refer to underwear. I can't say anyone in my generation (born in 70s) would use the term, but we do know what it means. My parents (born in the late 40s) use the term quite often. I can't remember them using any other term for undies.

I also consulted the OED, whose entry for ginch makes no mention of Canada, underwear, or the supposed Ukrainian origin:

An attractive woman, esp. (freq. depreciative) one regarded as an object of sexual gratification. Also as a mass noun: such women collectively.

1934 J. D. Carr Eight of Swords ix. 98 He found himself walking away beside this lithe, bright-eyed, altogether luscious ginch in the tennis frock.

1971 E. Tidyman & W. Friedkin French Connection (film script) (Electronic text) 6 A close shot of a chorus line, with lots of tits and ass and lean, long legs... Russo takes the seat on the right, eyes immediately on all that ginch.

Well, wow. I’ve seen The French Connection and read a bit of detective fiction, but I can’t remember ever encountering ginch in this sense or any other. Please let me know in the comments if you’ve heard or used the word in any context.

Through its cheeky, outside-of-the box marketing campaigns and sassy names for its products, Ginch Gonch has acquired the reputation of being the brat of the industry. Ginch promotes fun, freedom of expression and diversity through its famous catch phrase “Regardless of your inches we cover you in our Ginches!”. Its “Shiny Heiny”, “Wiener Eater” and “Crotch Rocket” underwear have won the hearts and crotches of millions all over the world who embrace the Ginch Gonch Live Like a Kid! philosophy.

True & Co. and the MILFs

Posted at 07:02 AM in Advertising, Canadian, Naming, Slang, Underwear | Permalink

Isn't there a "gitch gitchy gitchy" in the backup to the Coasters' "Little Egypt"? (Or is it something else entirely, as so often is the case with lyrics?)

Jan: "She did the hoochie-coochie real slow"?

"Gooch, goochie or gootchie was apparently already a term in the American South for a woman's vagina, and hoochie coochie has been suggested as referring directly to sex."
http://en.wikipedia.org/wiki/Hoochie_coochie

I'm a life long sw Ontarian and the word I use is gitch. As in, "the worst part of tipping the canoe this morning, was having to sit in my wet gitch all day until we could make camp." (I was a canoe guide for a few summers and sitting in wet glitch all day could lead to "gitch itch.")

I'm also from SW Ontario - born and raised here. Gitch and gotch (and gotchies) are very well known terms in this area, I'd say. I've never heard the terms ginch and gonch, though.

Wonder if the "-ies" usage is related to the Yiddish "gotkes," a word I always heard used for underwear.

Jessica: I couldn't find gotkes in any Yiddish-language references, but it would make perfect sense given the (supposed) Ukrainian etymology.

I'm from Nova Scotia, and my Mom always called my brother's underpants "gonchies".