How can a brand name convey a specific benefit—in this case, underwear so smooth and sleek it’s almost like wearing no underwear at all—without resorting to descriptive terms (Vanishing Edge, Invisibles)? For one U.S. company, the solution came from Vietnam-era slang.

Commando is a brand of elastic-free women’s underwear and hosiery designed with smooth edges that don’t show under clothing. Founded in 2003 by husband-and-wife team Kerry O’Brien and Ed Biggins, the company is based in South Burlington, Vermont, far from major garment-industry capitals; products are made in the U.S. and sold at department stores and online. “Commando” is an excellent example of a suggestive name—and by suggestive I mean not only the dictionary sense of “implying something slightly improper” (completely appropriate in this context) but also the trademark sense: “indirectly alluding to a quality of a product.” That’s because of commando’s metaphorical secondary meaning.

Commando first entered English in the late 18th century, a borrowing from Portuguese that originally referred to “an armed and mounted party of men” or the expedition undertaken by such a party. It wasn’t until World War II that the word referred to a single person—specifically, according to the OED, “a member of a body of picked men trained originally (in 1940) as shock troops for the repelling of the threatened German invasion of England, later for the carrying out of raids on the Continent and elsewhere.” Until 1942, “commando” was capitalized.

The underwear brand Commando isn’t about shock troops: it’s about “going commando,” a slang phrase first documented (again according to the OED) in 1974, in Current U.N.C. [University of North Carolina] Slang: “to wear no underpants (beneath one’s clothing).” “The origin of this use is obscure,” the dictionary notes; “the allusion appears to be to commandos’ reputation for action, toughness, or resourcefulness rather than to any specific practice.”

In 2005, Slate’s Explainer column attempted to get to the bottom of “go commando”:

When did the term “going commando” enter the civilian lexicon? The phrase dates back to at least the middle of the 20th century, when Americans used it to mean “toughening up.” (That meaning persists to this day in some contexts.) The phrase’s more common connotation dates back to at least 1974, when it appeared in a source on college slang. The phrase “crotch rot" emerged during the same period: It first appeared in 1967. It's possible that “going commando” first poked its way into the public consciousness during the Vietnam War, when American special forces were spending extended periods in hot, wet jungle environments. The phrase got its big break in 1996, when Joey and Rachel went commando on an episode of Friends.

Ross: Okay, now hold on. Joey, why can’t you just wear the underwear you’re wearing now?
Joey: Because, um, I’m not wearing any underwear now.
Ross: Okay, then why do you have to wear underwear tonight?
Joey: It’s a rented tux, Okay. I’m not gonna go commando in another man's fatigues.

As Joey’s line and the military history suggest, “to go commando” is traditionally associated with men; appropriating it for a women’s brand makes it that much more dramatic and memorable.

Commando is a popular trademark for many products other than underwear: I found records in the USPTO database for Commando padlocks, lubricants, auto parts, tires, coffee, beer, and jerky. I also discovered that Commando the underwear company—which to date has been a women-only brand—has filed for protection of “Commando Naked,” a men’s line.

Co-founder O’Brien says on the Commando website that the company’s products are “sometimes saucy” and “put the fun in functional.” Most of the product names, however, are descriptive: thong, high-rise panty, cami, half-slip, control brief. Nope, nary a cheekini in the lineup—although I admit the “Commando” brand name had me seeing the descriptive term tank in a new light. It’s in the “accessories” category that Commando lets its guerrilla flag fly.

The very first Commando product, in fact, was named Takeouts (“The Better Boob Job”). The “full-cup-boosting” silicone inserts—known generically as cutlets—cost $48 and are “grope tested,” it says here. 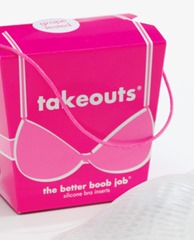 Other accessories with creative names include Low Beams (single-use nipple covers), Top Hats (reusable nipple covers), Matchsticks (double-stick tape for bra straps), Match Tips (double-stick adhesive dots), and Cleavage Cupcakes (“a perky plump-up for what nature already gave you”). The cheeky names are supported by playful copy that spins each metaphor for everything it’s worth.

By the way, Commando’s URL is WearCommando.com. Commando.com is a communications agency in Chicago. As I’ve said before, you don’t need a “pure” URL when you’ve got a plausible alternative and a strong brand story.

Bonus link: The 10 Commandments of Going Commando (“1. Thou Shalt Not Take a Yoga Class”).

True & Co. and the MILFs

Posted at 09:55 AM in How They Got That Name, Military, Naming, Retail, Slang, Television, Trademark, Underwear | Permalink

While Commando is a cute mark, it's really more descriptive than suggestive for trademark purposes, because it's commonly used and recognized slang. They may be able to register it, but would (and should, IMO) have a difficult time enforcing the registration against a company that says, for example, "Don't go commando - buy our briefs!"