« On the Visual Thesaurus: Branding by Definition | Main | The Porsche Chiasmus »

I’d missed the new marketing campaign for household brand Lysol until a column by New York Times advertising writer Stuart Elliott brought it my attention. Earlier this week, Elliott wrote in one of his regular “20 Questions” columns:

Will a new campaign for the Lysol line of products sold by Reckitt Benckiser, which is centered on the word “healthing,” prove to be the biggest bugaboo for English teachers and grammarians since R. J. Reynolds infuriated them with the jingle “Winston tastes good like a cigarette should”? 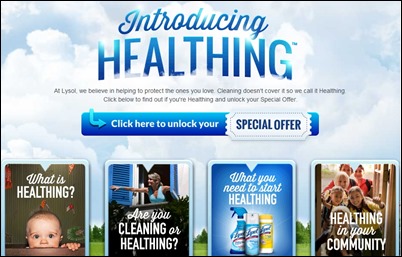 “Cleaning is hoping you’re killing germs. Healthing is knowing it.”

My answer: Nah. In the nearly six decades since that Winston jingle provoked an epidemic of pearl-clutching we’ve become blasé about (or unaware of) advertisers’ “bad” grammar (see “Lay Flat Collar,” “To Each Their Own,” et al.) and parts-of-speech-play (see “Tonight We Tanqueray,” “Let’s Merry,” “I Zappos to Get Noticed,” “Plus Your Life,” “Step into Awesome,” et al.). I suspect that some people even look forward to the next flight of language fancy from advertisers. I certainly do.

Still “healthing” bears comment – as does the Lysol brand itself.

Lysol has gone all in with its Healthing campaign, which launched in April and appears to have grown out of the brand’s 2010 “Mission for Health” initiative. The company has registered the word “healthing” and the slogan “Stop Just Cleaning. Start Healthing” as trademarks, and has launched educational/marketing partnerships with schools, YMCAs, and the U.S. Centers for Disease Control and Prevention. “Healthing” appears throughout the website (although I haven’t yet seen an ad that uses it).

The association with health – indeed, the transformation of “health” into an activity rather than merely a state – connects Lysol with its beginnings as a disease fighter. The product was developed in Germany in the 1880s as a safer alternative to highly toxic carbolic acid, then commonly used as a disinfectant in hospitals; Lysol was derived from cresol, a coal-tar derivative that was less toxic and more effective. The Lysol name probably gets its -sol from cresol and its Ly- from lysis, “loosening” or “dissolution”: Hydrolysis had entered English in 1880, a few years before Lysol’s invention. The name is not derived from “lye” (sodium hydroxide or potassium hydroxide) and it has nothing to do with lice. In Germany, its country of origin, the brand was called Lizol, which is still its name in much of the world today. 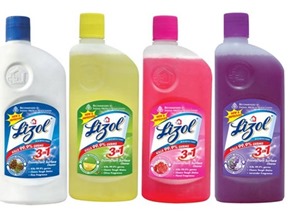 A New York company, Lehn & Fink, began importing Lysol from Germany in 1890 and began manufacturing it under a licensing agreement in 1912. Eventually, through mergers and acquisitions, Lysol ended up as a division of UK-based Reckitt Benckiser.

The cresol in Lysol wasn’t benign, however – it could cause burning and inflammation, and in one year, 1911, drinking Lysol was the most common means of suicide in Australia. The risks remained even after cresol was replaced with other compounds such as ortho-hydroxydiphenyl.

One of the darker chapters in Lysol’s history involves its marketing as a contraceptive douche.

“It is both effective and safe for delicate tissues.” Via Torontoist.

“Feminine hygiene” was the euphemism that covered both “offensive odors” and “birth control” (back when birth control was illegal in Canada and the United States). As Kristin Hall writes in “Selling Sexual Certainty: Advertising Lysol as a Contraceptive in the United States and Canada, 1919-1939,” published last year:

Though the euphemism was typically employed two to three times per Lysol advertisement, some repeated the term five times. According to psychologist Albert Poffenberger, repetition in advertisements was a useful tactic for advertisers trying to familiarize consumers with new concepts or goods. In his 1925 work, Psychology in Advertising, Poffenberger argued that as consumers, “the only things which we commonly see are those which we perceive, and the only things which we perceive are those which have been labeled for us, and labels stamped into our minds.” In addition advertisers also attempted to reassure consumers that Lysol was a safe and dependable contraceptive, describing Lysol as a means of attaining personal “protection” and indicating that Lysol offered “comforting assurance” to women.

However, Lysol was ineffective as a contraceptive (about half of the women who used it got pregnant), and it frequently caused burns, inflammation, and scarring. One competitor, Listerine, took out sternly worded ads obviously aimed at Lysol. 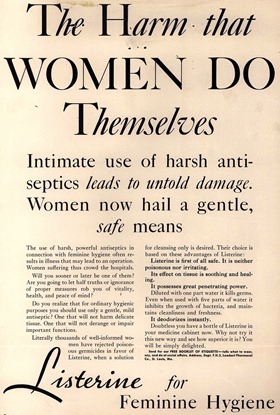 And you thought Listerine was just a mouthwash. Surprise!

For more about Lysol’s contraceptive marketing – and more ads – see this February 2012 article by Nicole Pasulka in Mother Jones.

Posted at 05:55 AM in Advertising, Anthimeria, Euphemisms, History, How They Got That Name, Slogans and Taglines, Women | Permalink

By the way, I always imagined that the "sol" meant the same thing as the "lys". Live and learn.