Dead to the world

It was about eleven o’clock in the morning, mid-May, with the fog bearing down hard on the bay and a look of weary desperation on every shopper’s face. They were all looking for something, but I had a sneaking suspicion what they were looking for wasn’t hardboiled euphemism. Not on Floor 2, in Bedding. Not with a spa velour cover. “You were dead, you were sleeping the big sleep, you were not bothered by things like that, oil and water were the same as wind and air to you. You just slept the big sleep, not caring about the nastiness of how you died or where you fell. Me, I was part of the nastiness now. Far more a part of it than Rusty Regan was.” – Raymond Chandler, The Big Sleep 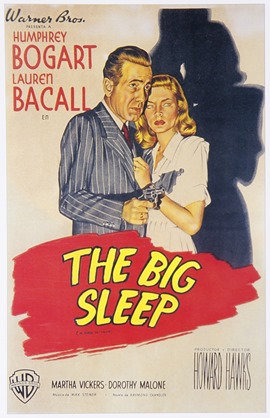 Could never completely understand what was going on in that movie, no matter how many times I saw it. But after a while, I was not bothered by things like that.

Risa: From the Wikipedia entry:
"The Big Sleep is known for its convoluted plot. During filming, allegedly neither the director nor the screenwriters knew whether chauffeur Owen Taylor was murdered or had killed himself. They sent a cable to [Raymond] Chandler, who told a friend in a later letter: 'They sent me a wire ... asking me, and dammit I didn't know either.'"

Thanks, Nancy, for starting my day with a badly-needed laugh. Excellent post! --bob

Risa, I hope you at least enjoyed watching the movie every time. Or were you merely watching it over and over in hopes of understanding it next time?

I always think of baby spiders when I think of The Big Sleep. That's about all I can remember.