« On the Visual Thesaurus: Shall We Plus? | Main | Word of the Week: Zajonc Effect »

I originally wrote about the Adimab cable-car ads in January 2011, when the company – which is in the antibody-discovery business – was one of several advertisers using the colloquial tag “not so much.”

At the time there was a reason for a small biotech company based in Lebanon, New Hampshire, to advertise on San Francisco cable cars: there was a health-care conference in town. According to the In Vivo blog, Adimab bought every ad on the Powell Street cable cars for a week.

Two years later, though, the ads keep chugging along, halfway to the stars, and I continue to puzzle over them. Lately I’ve been seeing the ads on the Hyde Street cable cars, which tend to be used almost exclusively by tourists, few of whom appear to be in a big hurry about anything, let alone antibody discovery.

For a company that boasts that its “integrated antibody discovery and optimization platform provides unprecedented speed from antigen to purified, full-length human IgGs,” the ads are positively whimsical. 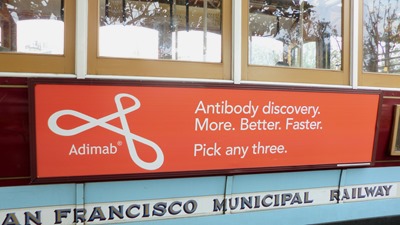 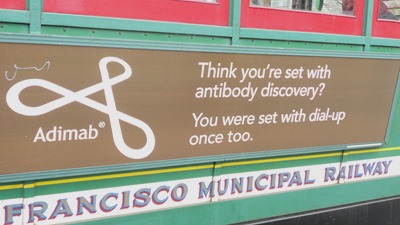 “Think you’re set with antibody discovery? You were set with dial-up once too.” (Oh, snap!) 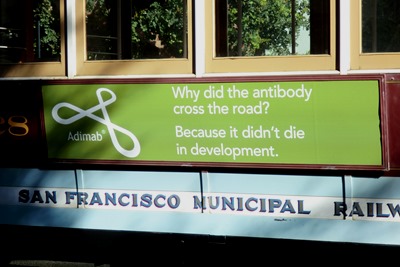 “Why did the antibody cross the road? Because it didn’t die in development.” (Scientist humor!)

One of the ads is in Chinese Japanese (thanks, Erin!). Translation, anyone? 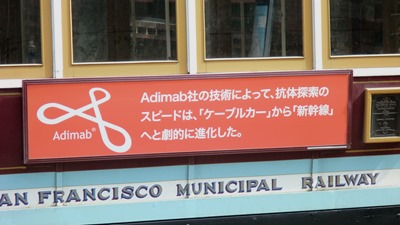 The ads must be working (as recruiting ploys, maybe?), but I have no idea why.

Also a mystery: what “Adimab” means.* I tried to find out (email, voicemail), but no one at the company responded. I did learn from the website that one of the founders, a gentleman named Tillman U. Gerngross, is “one of world’s leading yeast biotechnologists” and a professor of bioengineering at Dartmouth. Originally from Austria, he previously co-founded GlycoFi, Inc., which was acquired by Merck. I cannot tell you what the U in his name stands for.

* Commenter Alex did a Google search and learned that Adimab stands for Antibody Discovery Maturation Biomanufacturing. (Quite the mouthful.) Although I've now received a friendly email from a company spokesman, he did not confirm this name-origin story.

That's not Chinese, it's Japanese. I can't read the kanji, but I can tell that the first katakana word (starting on the second line of the ad) says "speed".

Erin: Duh, I should have recognized it. I see so many Chinese-language ads around S.F., I made a quick (and dumb) assumption without looking closely. I don't think I've *ever* seen a Japanese-language ad here.

It says in Japanese: The adimab technology made antibody discovery progress remarkably from "cable car" to "bullet train".

I like Brian's translation! I'm learning each day to improve my translating skills! (Japanese/English)

the first link will tell you that the meaning is "Antibody Discovery Maturation Biomanufacturing."

I assume the ads create buzz at the conference. Many of the people attending the conference are tourists by night and on the weekend. Even R&D scientists enjoy a little humor and whimsy now and then.

Thanks, Alex. As I wrote, the conference took place two years ago. Why continue advertising on San Francisco cable cars?

JP Morgan conference happens every year at that same time.

Thanks, Jon! I hadn't realized it was held in S.F. every year. In that case, I guess it pays for Adimab to keep the ads up year round.