Not Your Close Relative's X

It wasn’t your father’s Oldsmobile. 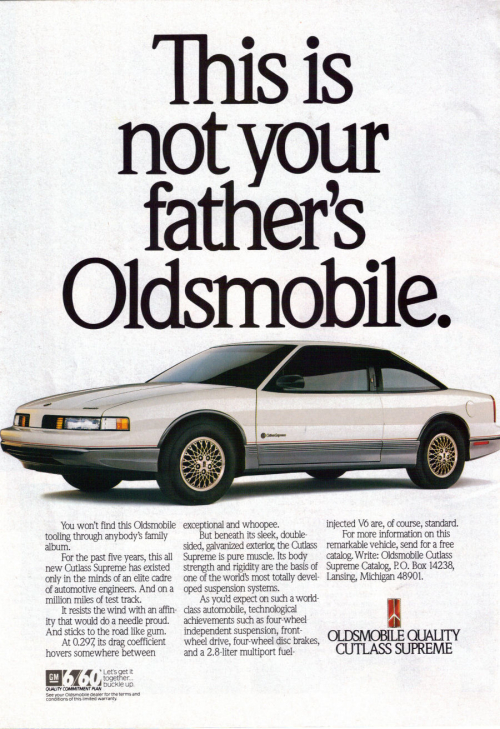 Oldsmobile print ad, circa 1988, via Sociological Images. Watch William Shatner in a TV ad from the campaign. 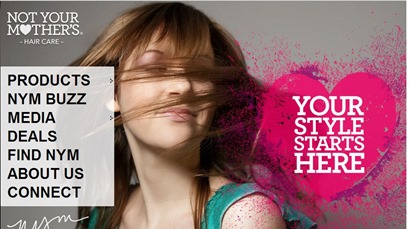 No way these are your daughter’s jeans.

Not Your Daughter’s Jeans banner at Side Street Boutique. The brand was launched in 2002 and is now known mostly as NYDJ.

And this definitely isn’t your kid’s horsey ride.

Outdoor ad for Golden Gate Fields (“Where the Bay Comes to Play”), April 2013.

According to TV Tropes, “Not Your Daddy’s X” is “an often-used stock phrase … done to ensure [sic] the intended customer that their [sic] product has evolved beyond its original form.” TVT’s examples include “This is not your father’s Autobot” (Transformers Generation 2), “These aren’t your dad’s puns” (Powerthirst), and – looping back to that original Shatner appearance – “Not your father’s Star Trek” (ad for Star Trek movie).

Posted at 07:21 AM in Advertising, Sloganclones, Slogans and Taglines | Permalink

That's the first time I've heard this phrase. Have you ever used it in a real life situation?

If I remember right, the "This is not your father's Oldsmobile" campaign was pulled after not-too-long a run. It became apparent that "your father" was the market, and it WAS his Oldsmobile. The brand didn't survive too many years after that.

I've copyedited or proofread a few books in the "Not Your Mother's..." cookbook series put out by the Harvard Common Press: http://www.harvardcommonpress.com/archives/books/cookbooks/not-your-mothers/

Alina: Do you live outside North America, perhaps? The phrase is very common; yes, I've used it (facetiously) in conversation, and even in a client brief!

Dan: The Oldsmobile brand survived until 2004, 16 years after the first ad in the "Not Your Father's..." campaign.

The flip-side of that Olds ad, I imagine, is the 2007 Canadian Club campaign: "Damn Right Your Dad Drank It."

Certainly it made sense for Oldsmobile, since 1988 was the first year for a front-wheel-drive Cutlass Supreme.

I really laughed at the Golden Gate Fields billboard. When I was 4 years old, I had a rocking horse just like that - but the rear springs were broken. The rear end had fallen and the horse was at a permanent angle. What's a kid to do? I put a metal bowl on my head for a helmet and pretended I was a show jumper, since the horse was permanently taking off. The reason no one fixed the rocking horse is that we had real horses.