No, not someone who lives in Mobile, Alabama. It’s another spin of the faux-comparative-maker machine. 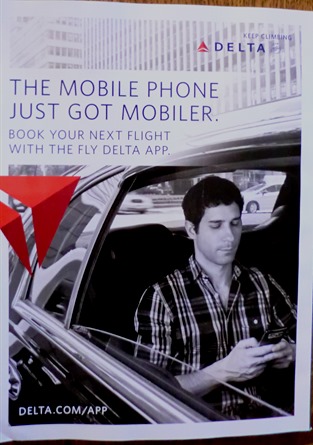 “The Mobile Phone Just Got Mobiler.” Ad for Delta mobile app, back cover, The Atlantic, April 2013.

This particular ad is the only one I’ve seen that uses word play; other ads for the mobile app use a straightforward benefit approach (and depict the QR code that’s the whole point of the pitch). It’s always a little unsettling when an advertiser code-switches within a campaign.

Posted at 08:29 AM in Advertising, Airlines, Comparatives, Trends | Permalink

Have you seen the golf equipment commercial for (Callaway's?) Rocket Ballz drivers? They're Rocket Ballz-ier. There is a hashtag: #ier, and several pros are being paid a lot of money to prominently display that hashtag on their headwear.

Might make for an interesting post. (If you haven't seen them, and/or aren't a golf fan, tune in to ESPN this afternoon or tomorrow, or CBS over the weekend, as they cover The Masters.)

Steve: Thanks for that tip! I found the spot online: http://www.ispot.tv/ad/7Iua/taylormade-rbz-stage-2-rocketballz-ier

I've seen a couple of those spots a couple dozen times--and that's a very, very conservative estimate. What's it say about the marketing that I couldn't remember the manufacturer? (And Taylor-Made is a MAJOR player in golf equipment; on the other hand, I'm only a fan...I don't play.)

On the other hand, their ads do make an impression. Are they impression-ier?

Thanks for starting my day off with a good chuckle. By the way, I have been enjoying the new NPR blog too.

too funny. i would think such ads would target specific geo areas and not the nation as a whole - for a reason or two.. no?