« Word of the Week: Swatting | Main | On the Visual Thesaurus: Shall We Plus? »

As recently as a few decades ago, most parents gave their children names that would help them fit in: to a family, a clan, or the culture at large. Now a lot of parents want exactly the opposite: names that stand out, as though children were boxes of cereal competing for shelf space. Standing out is the new fitting in. Three recent articles examine the trend:

I nodded enthusiastically while reading this post on the Lexicon Branding blog on why client-written creative briefs are usually inadequate. (Read my own take on creative briefs for naming projects.)

NPR has launched an excellent new blog called Code Switch that covers “the frontiers of race, culture, and ethnicity.” Code switching is a term from linguistics, and many of the posts are about language. Start here, with the introductory post “How Code Switching Explains the World.”

Nine red flags before naming your startup – a rare sensible article about name development and trademark.

Why do tech neologisms make people angry? by Tom Chatfield, author of Netymology: A Linguistic Celebration of the Digital World. (Via Wordnik.)

Those irritating verbs-as-nouns (a solve, an ask, the reveal), by Henry Hitchings, author of The Language Wars and impartial observer of language change.

In praise of sensible peeving, on The Economist’s language blog, Johnson, applauds Chatfield and Hitchings for their “sensible contributions to an all-too-often senseless debate.”

Nine things you probably didn’t know about swear words. And speaking of swearing, don’t even think about using “tabernacle” in  a French-language children’s book that might be read in Quebec. (Via Sesquiotic.)

“Should I rename my business?” A handy flow chart from brand consultancy A Hundred Monkeys.

The rather surprising etymology of “dismal.” It’s completely unrelated to “dismay,” by the way.  (Via Language Hat.)

How does our algorithm work? It periodically checks the New York Times home page for newly published articles. Then it scans each sentence looking for potential haikus by using an electronic dictionary containing syllable counts. We started with a basic rhyming lexicon, but over time we've added syllable counts for words like “Rihanna” or “terroir” to keep pace with the broad vocabulary of The Times.

The air was sticky,
and guerrillas carrying
rifles served him tea

Instead of awesome, you could say … well, lots of things. (Via Nancy Nall.)

The call for entries for the Clio Awards, the Oscars of the advertising agency, used a series of “sliced” images to make industry statistics memorable. They’re striking and clever, except for the last one, “What Creatives Wear to the Clio Awards Ceremony.” Here’s a detail: 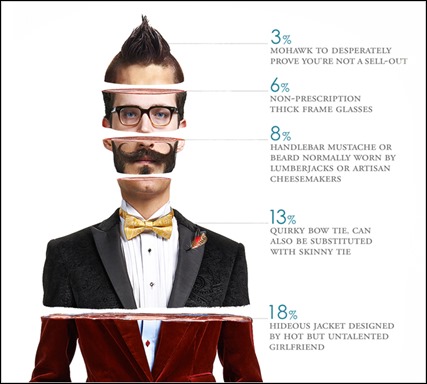 Last I heard, there were also a fair number of women creatives in the ad industry. But you won’t see them represented here. Read Ms. magazine’s take, “Mad Men and the Clio Awards: How Much Has Really Changed Since 1965?”

Re verbs-as-nouns, I don't mind reveal as a noun. Ask and solve have perfectly serviceable noun counterparts - request and solution. But "revelation" for reveal carries other connotations and is just way too formal for most situations; unveiling doesn't work either. Bring on the reveal!

I agree with Jessica -- I hear "the reveal" as a deliberate allusion to either a stage magic act (not sure where I got this) or a plot twist in a suspenseful movie. Sometimes a little precious, especially when used in a business/marketing context, but often OK. Definitely not as bad as the others.

Also, i'm not usually that sensitive about grammar, but something about the increasingly common "substituted with" mistake in that Clio image (instead of "replaced with") really grates on me. Maybe because it seems like the writer's deliberately showing off a little by using the bigger word, so when they can't even use it correctly...