Word of the Week: Grist

One of George W. Bush’s Bushisms, first reported by Newsweek in 2000, was “I thought how proud I am to be standing up beside my dad. Never did it occur to me that he would become the gist for cartoonists.”

So it seems that a lot of people are substituting gist (the real point, the crux) for grist (grain) because they think it’s logical. In other words, they’re using a type of malapropism known as an eggcorn.

Gist is certainly more familiar than grist to modern-day, non-grain-grinding speakers of English. When gist and grist are pitted against each other in GoogleFight, the results are decisive. 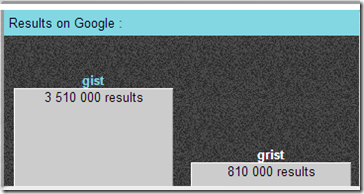 Of course, the two words have different consonant sounds: the G in gist is /j/, while the G in grist is /g/. So I’m guessing that this particular eggcorn is based on mis-reading rather than mis-hearing. That is, if it’s an eggcorn at all: I couldn’t find it in the Eggcorn Database, which contains many examples of eggcorns based on mis-hearing: for all intensive purposes and minus well are among the most common.

* Grist is not related, etymologically, to gristle, which has meant “cartilage” since Old English and which is related to West Germanic words such as crostila and gruschel.

** This entry also contains useful and entertaining information about millstone, keep one’s nose to the grindstone, and run of the mill.

Posted at 08:44 AM in Eggcorns, Etymology, Journalism, Word of the Week | Permalink

I think the folks at the Democratic Underground forum like having fun with language. I just did a search on the expressions "albatross/millstone/anchor around sb's neck and found the following exchange: "Is Pawlenty going to be a millstone on the albatross around McSame's neck?" - "No, the anchor tied to that millstone."
Also, this reply to the gist post: "I think mills get grist, not gist, if that's the jest of what you're saying."