Here’s a an interesting-looking niche product: goggles that allow climbers to look straight ahead yet see the crag or pin above them. 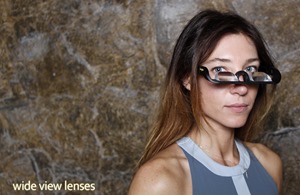 I wish an equivalent amount of imagination and research had gone into creating the product’s belabored name: Belāggles.

The macron over the A is telling us that the name is pronounced “belay-gles,” as in belay plus goggles. But the macron-ized word appears only in the logo: everywhere else – in the web content, in media reports, on Twitter and Facebook – it’s plain old Belaggles. And my brain does not interpret “Belaggles” as “Belay-gles.”

English may be a “shifty whore,” as lexicographer Kori Stamper has so delicately put it, but our written language does have some commonly acknowledged rules that most of us have internalized. One of those rules says that when a vowel precedes a doubled consonant, it takes a short sound: waggle, gaggle, bedraggle, straggle, haggle. Slapping a diacritical mark over that vowel doesn’t change the rule; in fact, I bet most of the population doesn’t see the little horizontal line as anything more than an embellishment.

(Besides, even when I pronounce it right, the name sounds comically wrong. Want some shmear with those belāggles? Stop belāggling me! My new puppy is a Labrador-beagle mix – a belāggle!)

The pronunciation isn’t the only thing that feels forced about the name. I found myself working altogether too hard to decipher the peculiar Gs in the logo: they look like a hybrid of a 4 and a 9, but they may be mountain peaks on sled runners. Or sailboats.

Mostly, though, the problem with Belāggles is a familiar one: the Awkward Portmanteau, aka the strenuous mashing-up of words to create a descriptive name. The strategy is misguided – your name should suggest, not describe – and the tactic is amateurish. Instead of jamming “belay” and “goggles” together, I’d have aimed for a name that communicates a benefit: reaching the top, seeing vertically, saving your neck.

See more names with gratuitous macrons, umlauts, and other diacritical marks on my Pinterest board. More bad portmanteaus here, here, and here, for starters.

Posted at 09:14 AM in Bad Names, Naming, Portmanteaus, Umlaut | Permalink

I believe that the pair of peculiar Gs is meant both to suggest the Y of "belay" and to be a picture of a pair of those goggles.

@empty: I'm obviously looking at the logo through the wrong gaggles.

I'm getting a sudden craving for bagels.