A few observations about the new marketing campaign for the Bay Area’s Sutter Health medical group. 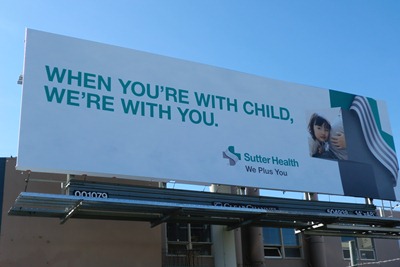 First, who says “with child” in 2013? Even on Downton Abbey, set between 1912 and 1922, characters were constantly saying that so-and-so was “pregnant.” (The casual use of the word was almost certainly anachronistic: the Online Etymology Dictionary tells us “pregnant” was a taboo word until the mid-1950s. “Expecting” and “in the family way” were far more common.)

“When you’re with child, we’re with you” is earnest but clunky: “with child” and “with you” aren’t really parallel here.

But what will puzzle most people about the ad is the slogan: “We Plus You.” 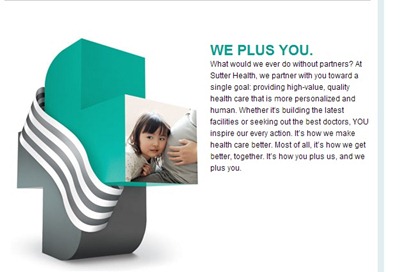 The logo? Your guess is as good as mine.

It isn’t intended as a mathematical statement, with plus as a conjunction: “We plus you equals good health,” or something like that. No, plus is clearly a verb here: “It’s how you plus us, and we plus you.”

“Because you plus us … and we plus you.”

I remember some talk about to plus a couple of years ago, when Google launched its social-media service Google Plus. To give a stamp of approval to something on Google Plus, you click a “+1” icon. Users started referring to the action as “plussing.”

But it turns out Walt Disney had Google beat by almost 70 years. According to How to Be Like Walt: Capturing the Disney Magic Every Day of Your Life, a chatty/motivational 2004 biography that refers to its subject by his first name, Walt Disney emphasized “the plus factor” to his artists and designers:

Sometime during the 1940s, Walt coined the term “plussing.” Normally, the word “plus” is a conjunction, as in “two plus two equals four.” But Walt used the word as a verb—an action word. To “plus” something is to improve it. “Plussing” means giving your customers more than they paid for, more than they expect, more than you have to give them. … He began by plussing Mickey Mouse with sound, then plussing the Silly Symphonies with color. Walt plussed the skills of his artists by sending them to art school at his own expense. Walt’s relentless quest for excellence kept him at the leading edge of his industry—and left his competitors, well, nonplussed.

Sutter Health may be using “plus” in this “improvement” sense. Or maybe it’s saying “You complete me.”

“We Plus You” isn’t the only bit of peculiar wordplay in the Sutter Health campaign. Here’s a full-page print ad in the March issue of San Francisco magazine: 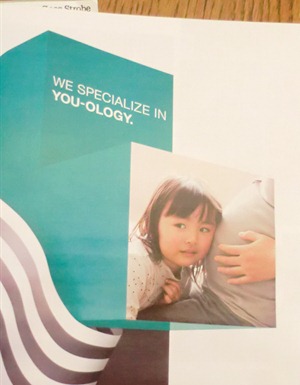 You-ology? Right down the hall from Your-ology, where you can get that prostate exam.

Re the title of this post: nonplussed does not mean nonchalant, although a lot of people think it does.

I think that "we plus you" is strange attempt to use the medical cross as a verb in the same way that the heart symbol is used to mean "love" (even when it's pronounced "heart"). But then they spell it out and call it a plus, which defeats the purpose. Of course, you can't say "we cross you"—one way or another, that sends the wrong message.

But maybe I could be way off the mark here.

Thanks for this one, Nancy. I recently worked on a campaign for a hospital birthing center like this one, and it was nice to share the post with my client. I'm proud to say, when working on the project, the phrase "with child" never crossed my mind as an option to use. I do hear that term used now and then, but it's always in a humorous, intentionally old-fashioned way.

The logo is a stylized plus sign rendered in 3D and seen from an angle, right?

Hmmm, might the strange use of You-ology reflect an unintended foreshadowing of the brand's demise: Eulogy.