Jen Doll, who works the language beat for The Atlantic, has a column in the March issue about a trend she’s been noticing:

Evvvvverywherrrre, from instant messages to texts to tweets and even e‑mails, I see examples of what language watchers call “word lengthening.” The habit began among teens and 20-somethings, but it is no longer limited to them. Adults are adding o’s to their no’s, s’s to their yes’es, and i’s to their hi’s, to say nothing of a glut of exclamation points. In response to some recent news, my 60-something mom wrote, “LOVE IT AND YOU TOO!!!!” What is going on?

Doll got answers from linguists: Elongation is an attempt to convey emotional nuance in short messages. It occurs frequently in instant messaging and texting, less so in email. It’s a way to foster a sense of shared identity.

Fair enough. But how to explain word-lengthening in business names, like the two I spotted recently? 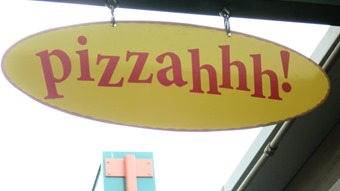 Pizzahhh! is the new incarnation of sausagemonger Top Dog (good name!), which had occupied the space for almost 40 years.

The creators of these names may think they’re being clever. Or they may have just futzed around, adding letters until they found available domain names.

I have two cautionary comments for them:

1. How many H’s did you say there were? Three? Four? (I forgot numerous times as I was writing this post.) Do you expect your customers to say “I’ll meet you at Pizza with some extra H’s on the end, no, not Pizza Hut, more like what you say at the doctor’s, only with an exclamation mark”? Do you want them to say “It’s that photo-GIF thing with the funny spelling”?

2. If it’s a generic name it remains generic no matter how many times you repeat a letter. And generic means “not legally protectable.”

To your point.... Nnnnooooo! Top Dog is now a pizza joint?

A random number of repeated letters also makes it tough to search online ("Was that pizza with two or five extra 'h's'?" Oh hell, let's Google Zachary's). And, Phhhoto reminds me of that ever wonderful epithet, "pfft."

You've misunderstood the Pizzahhh one, it's supposed to be conflating the word "Aaahhh" like Aaahhh that's good pizza.

It's a different phenomenon than the normal word elongation in your other examples.

Christine: I did understand that meaning. It's still word lengthening, and it's still a generic name!

I understand the point about adding letters, but why would "Pizzah", with just one extra "h", not be distinct from "Pizza"? Is "Psmith" the same as "Smith" legally?

John: If "Psmith" is pronounced "Smith," and if Psmith Co. sells goods in the same international class as Smith Co., the two names are considered identical, legally, and "Psmith" won't be able to get trademark protection. Likelihood of confusion is judged by several criteria, similarity of sound being one of them. The example given by the USPTO is "T.MARKEY" for shoes and "TEE MARQUEE" for shirts: "The marks are similar because they sound identical; and although the goods differ, they are considered related for the purposes of a likelihood of confusion analysis." http://www.uspto.gov/trademarks/basics/BasicFacts.pdf

It's pretty funny that the word lengthening in texts seems to balance out the concomitant abbreviating in texts so: "C u tmro! Byeeeeeeeeeee!"