I’ve written dozens of taglines for clients and seen them on lots of websites, brochures, and business cards. But until last week I’d never seen one of my taglines on a 16-by-20-foot wall at a conference. RSA Conference, Moscone Center. Naturally, I zoomed in on the tagline. That wall is tall.

Or on a car wrap. 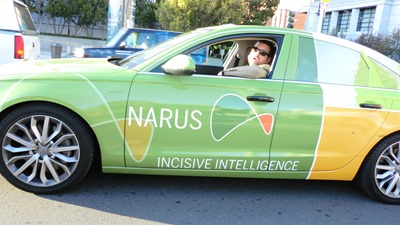 The Narus Audi A6. Ethan was the designated driver during the conference.

Narus, an independent subsidiary of The Boeing Company, is a cybersecurity company whose clients include governments, carriers, and enterprises. The recently hired president, John Trobough, wanted to relaunch the company in time for the RSA information-security conference in San Francisco. Our branding team had just over three months to do all the pre-launch work: new visual identity, new web content, new print materials, and – here’s where I came in – a new tagline and product nomenclature. (The Narus name, which is derived from Latin gnarus, meaning “skillful,” did not change.)

Many of Narus’s competitors use “secure” or “security” in their taglines. Rather than imitate them, I focused on Narus’s distinctive strengths: its brilliant staff (collectively, they hold 32 patents), its close ties with academia, and its advanced machine-learning algorithms. I worked with concepts like penetrating, insightful, and sophisticated, and I looked for ways to shed light on the Narus name (which probably doesn’t have a lot of meaning for non-Latin scholars). The result: Incisive Intelligence.

Everyone on the client team responded positively to incisive, an underused word whose literal meaning is “cutting-edge.” Also positive: the way intelligence communicates both “information” and “intellect” while supporting the original meaning of Narus. The in-in alliteration is a memory aid, and it carries echoes of the N in Narus. We continued the N mnemonic with the simple yet effective (and flexible) nSystem and N10 product names.

Mark Landkamer of Landkamer Partners created the visual identity and web design. (Fun fact: the green-and-orange symbol next to the Narus name was abstracted from a graph of a mathematical formula for equilibrium. It also resembles a stylized N.) Stacey King Gordon and her team at Suite Seven developed the content strategy and wrote all the content. Jay Cornell and James Foreman did the HTML and Joomla programming, respectively. Special thanks to trademark lawyer Jessica Stone Levy for assistance with legal questions.

Posted at 09:11 AM in Naming, Shameless Self-Promotion, Signs, Slogans and Taglines, Technology | Permalink

Before I read that the visual symbol was abstracted from a formula for equilibrium, I thought it looked like a stylized horse saddle, green on the top and orange on the bottom, or reverse, depending on whether you're looking in from left of center or right of center. An interesting optical illusion there.

Continuing the saddle analogy, my first thought when seeing the symbol was of a hyperbolic saddle, which has only one stable point if it's in a normal gravity field.