Word of the Week: Behindativeness

Behindativeness: The exaggerated rear shape created by a large dress bustle: “That lady has got a deal of behindativeness.” – Passing English of the Victorian Era, a Dictionary of Heterodox English, Slang and Phrase, by J. Redding Ware, published in London in 1909. 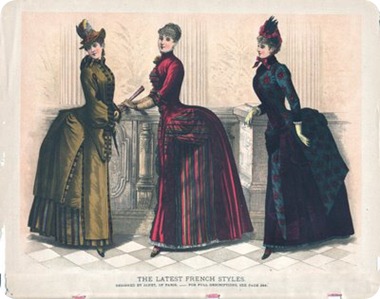 Bustled ladies with a deal of behindativeness, 1885-1886. From Digital Changeling.

You could easily pass several delighted hours in the company of Passing English of the Victorian Era, which is reproduced in its entirety at the Public Domain Review, a project of the Open Knowledge Foundation. (Other worthy time-wasters on the site include a 1912 illuminated version of Tennyson’s Morte d’Arthur, a 1888 edition of Curiosities of Puritan Nomenclature, and Dennison’s Bogie Book for Halloween, from 1920.) The dictionary’s introduction sets a lofty tone: “‘Passing English’ ripples from countless sources, forming a river of new language which has its tide and its ebb, while its current brings down new ideas and carries away those that have dribbled out of fashion.” (“Passing” here means “ephemeral,” I think.) But the contents are more anecdotal than scholarly; the entry for chortle, for example, neglects to mention that Lewis Carroll coined the word in Through the Looking-Glass (1872).

But that’s a tiny quibble. The offhandedness of the dictionary is one of its many pleasures. Here I learned, for example, that the following words and phrases were Americanisms still regarded in early 20th-century England as rustic novelties: bark up the wrong tree, have an axe to grind, filibuster, fuss (“a dispute without serious consequences”) cold snap, lobby (the political verb), guess (“think”), thusly (introduced by humorists in the 1860s), tickle to death (“to delight in the extreme”), and enthuse (“not yet accepted in England,” sniffs Mr. Ware; the OED still calls it “an ignorant back-formation”). Americans of the Victorian era were also fond of enthuzimizzy to mean “enthusiasm,” and they liked to affix ker- to many words to imply movement: kerwallop, kerslap, kerflummox, kerbang. (I can’t help wondering whether the more recent ka-ching! – the sound of a cash register – owes something to this tradition.)

Passing English is full of synonyms and euphemisms for drinking: play camels, wash one’s neck, colour the meerschaum, and tickle one’s innards all meant “to get drunk.” So did N.Y.D., short for the euphemistic “not yet diagnosed.” Going to see a man meant “going to get a drink,” while going to see a dawg meant going to see a woman “whose social position may be assumed by her association with ‘dawg’.” But going to see a man about a dog is sadly omitted, even though it dates back to the 1860s.

If you need proof that initialisms weren’t born in the Age of Texting, look no further. To our Victorian forebears an N.N. was a “necessary nuisance” (that is, a husband), K.A.B.G.N.A.L.S. was reverse-spelled “back slang,” P.C. meant not “politically correct” but “poor classes,” R.M.D. was “ready money down,” and X.X. meant “double excellent.” I’m particularly fond of the abbreviation N.F., which stood for “no fool.”

As for the ladies’ bustle depicted above, it isn’t defined in Passing English, presumably because every reader would have understood it. The word’s origins are murky: it may come from German Buschel (a bunch or pad) or from another sense of bustle: a rustling motion.

(Hat tip for the Passing English link: The Hairpin.)

Posted at 07:56 AM in Dictionaries, Fashion, History, Slang, Word of the Week | Permalink

I would have thought that "colour the meerschaum" was about smoking rather than drinking.

Empty: You'd think so, but it isn't the case. "The phrase arises from an association of ideas--those in the first place of darkening the colour of a meerschaum pipe by steady smoking, and in the second, intensifying the hue of the nose by steady drinking. The colour harmony between the pipe and the nose above it is very droll, the hintful phrase itself a singularly good example of the keenness of the common people masking itself in a mock politeness which is worse than the plain truth."