The Names of Fine-Art Book Presses

On Sunday I attended the CODEX International Book Fair, a biennial exhibition and sale of artists’ books and fine-art editions. It’s a spectacular event—nearly 200 exhibitors from all over the United States and several other countries—in a magnificent setting: Richmond’s Craneway Pavilion, at the edge of the bay. Although Craneway is only about 15 miles north of my house, this was my first visit. It won’t be my last. The 525,000-square-foot sawtooth-roof structure, designed by the prolific German-American architect Albert Kahn, housed a Ford Motor Company assembly plant, the largest on the West Coast, from 1932 through 1955. It originally produced Model “A” cars; during World War II it was retooled to produce tanks and jeeps. Women—the inspiration for “Rosie the Riveter”—made up much of the plant’s wartime workforce. The Rosie the Riveter/World War II Home Front National Historical Park is adjacent to the pavilion, in the old Kaiser shipyard, which built Liberty ships.

The building was severely damaged in the 1989 Loma Prieta earthquake. In 2004 it was bought by a development company; the renovation, by Marcy Wong Donn Logan Architects, resulted in a 2008 National Trust for Historic Preservation award. (Here’s a Flickr set of the building taken with a kite-lofted camera.)

The light-filled pavilion made an inspired and inspiring setting for the hundreds of art books on display. My artist friend Susan Bercu has written about the aesthetic highlights of the CODEX show; I’ll focus here on memorable names of presses and book designers. These are names that truly serve as the titles of stories—names that make you want to strike up a conversation.

Altazimuth Press (East Sussex, UK). I’d known azimuth—from the Arabic as-sumūt, compass bearings—but not altazimuth. Owner Peter Chasseaud patiently explained to me that an altazimuth (emphasis on the second syllable) is a telescope or other instrument mounted so that it can swing both vertically and horizontally. The word is a portmanteau of altitude and azimuth.

Deeply Game Productions (Pasadena, CA). Owner Sara Press (yes, her real surname) told me that “deeply game” is a positive attribute of a sporting dog. She started using the business name after publishing a letterpress edition of A Deeply Game Dog: The Sweet Science of Breeding Champions.

Golgonooza Letter Foundry (Ashuelot Village, NH). Alas, no one was available to answer my questions about “Golgonooza.” 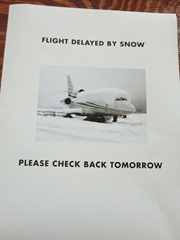 I looked it up afterward. Owners Julia Ferrari and Dan Carr took the name from William Blake’s unfinished prophetic poem “The Four Zoas,” in which one of the chief figures lives “in Golgonooza, the city of the imagination.”

In Cahoots Press (Oakland). I love the word cahoots. It means “secret partnership” or “questionable collaboration,” and its etymology is in question, too. It may come from French cahute (cabin) or cohorte (cohort, companions).

Indulgence Press (Minneapolis). “Art books are an indulgence, a luxury, in the 21st century,” owner Wilber H. “Chip” Schilling told me. “Also, before he produced his movable-type Bible, Gutenberg printed indulgences for the Roman Catholic Church.”

Mixolydian Editions (Petaluma, CA). Named for one of the classical Greek musical scales.

The New Girl Press (San Francisco). Owner Georgette Freeman writes in her website bio: “Back then, my name was George. … By late 2000, after attending a crossdressers’ convention, I started my transition in Sacramento, continued in San Francisco, and eventually came out to my employer and supervisors. My change of name to Georgette and gender transition at work culminated in late 2001.” (You may never watch the TV sitcom “New Girl” in quite the same way.) One of Freeman’s projects involves carving paper-smoothing tools out of elk bones, which she harvests, butchers, cooks, and hacks up herself.

Vamp & Tramp, Booksellers (Birmingham, AL). I regret not asking the owners about their business name, but I suspect it speaks for itself.

Wordy addendum: While I was at the show I bought a MayBow’s Book Arts Jargonator from Dan Mayer Studios. It’s a volvelle (see my April 2008 post) consisting of three “reader-propelled” paper disks that create 27,000 word combinations: organically bone-clasped wormhole, for example, or pre-incised mutton thumper, or hieroglyphically knocked-up wayzgoose. 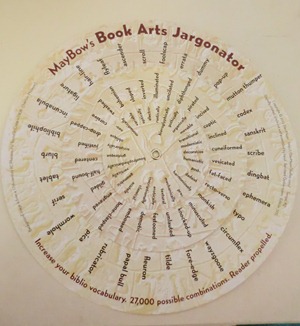 CODEX 2013 continues through Wednesday, February 13. Read more about it in Nancy Davis Kho’s article for SFGate.