On the Visual Thesaurus: XOXO for Valentine’s Day

In honor of Valentine’s Day, my new column for the Visual Thesaurus is all about XO, the abbreviation for “kiss and hug” (or is it “hug and kiss”?). A recent article in The Atlantic commented on the rise of xo (and xoxo and even xoxoxo) in women’s workplace email. My own focus is on kissy-huggy brands: xoJane, the women’s “lifestyle website” founded by Jane Pratt; XOXO wine (from Canada!), the XOXO Festival in Portland, Oregon, and many others. 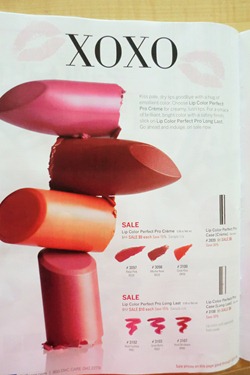 XOXO: lipsticks in the March 2013 DHC skincare and cosmetics catalog.

As a Valentine’s Day gift, access is free to all (but of course you’ll want to subscribe anyway). Here’s an excerpt:

How did X and O come to represent affection? Circuitously, it seems. The OED’s earliest citation for X meaning “kiss” is from 1763, in the signature on a letter from Gilbert White, a minister: “I am with many a xxxxxxx and many a Pater noster and Ave Maria, Gil. White.” But Stephen Goranson, a researcher at Duke University, is skeptical about that citation. He noted recently on the American Dialect Society’s listserv that White’s X’s may have in fact been crosses that represented not “kisses” but “blessings.” The “kiss” interpretation evolved from the “blessing” one; “unimpeachably kiss-identified” uses of X’s, wrote Goranson, didn’t appear until the late 19th century. (“Sealed with a kiss,” Goranson added, “is much older, but those sealings are generally direct kissing not epistolary.”)

And here’s a little blog bonus. Have you ever wondered why XOXO means “kisses and hugs” but OXO doesn’t? So have I. I did some research into OXO brands in the U.S. and U.K. and learned these interesting tidbits about the U.S. OXO, maker of ergonomic household tools:

Posted at 07:32 AM in Abbreviations, Beauty, Etymology, History, Holidays, How They Got That Name, Naming, Visual Thesaurus | Permalink

The theory behind the OXO brand - that it reads the same every way you look at it - only makes me love their gadgets more!

Jill C: I talk about the OXO meat-stock company in the Visual Thesaurus column: http://www.visualthesaurus.com/cm/candlepwr/xoxo-marks-the-spot/