« Word of the Week: Behindativeness | Main | Names in the Wild: Qookies »

Now with Even More Good!

“This nouning of adjectives thing is really getting out of control,” Ben Yagoda tweeted earlier this month. As evidence, he attached this photo: 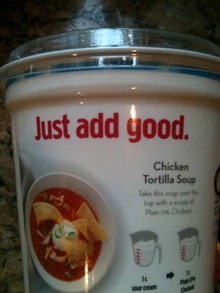 I did a little sleuthing and discovered the perpetrator of “Just Add Good”: Chobani Greek yogurt, which was using the slogan throughout its website. 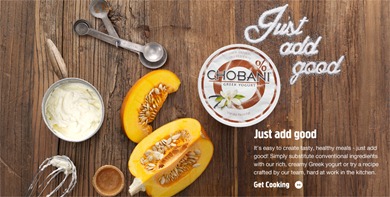 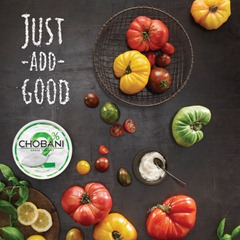 By the way, although Chobani calls its product “Greek yogurt,” the company was founded by a Turk, Hamdi Ulukaya, who lives in upstate New York near one of the company’s plants. According to the Wikipedia entry, Chobani comes from the Turkish-via-Persian word for “shepherd,” chob-ban (literally, “he who carries a stick”). An archived Chobani FAQ claims chobani is a Greek word. I don’t know any of those languages well enough to weigh in.

About a week ago Chobani switched from “Just Add Good” to a new slogan that uses “real” as a noun:

But there’s still plenty of nounish good to go around. Not to mention nounish awesome. Naked Juice billboards all over the Bay Area proclaim that the product has “1 lb. of awesome in every bottle,” which makes it “worth its weight in good.” 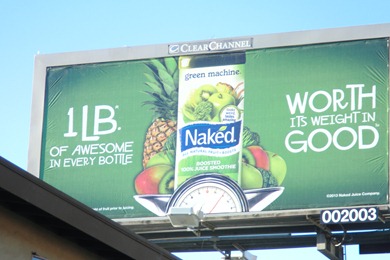 The slogan plays on the familiar idiom “worth its weight in gold.”

Naked Juice is based in Monrovia (Los Angeles County). The company was founded in 1983; the juice was originally sold “towel to towel on the beaches of Santa Monica, Calif.”

During Sunday’s Oscars broadcast I saw back-to-back ads with nounified good. In both of them, good is something that goes. Here’s “Get Your Good Going” from Blue Diamond Almonds:

Good is in every Blue Diamond Almond.
From Whole Natural to Wasabi and Soy Sauce.
Good is a catalyst. Good is contagious.
It’s a wonderful feeling. A magical feeling.
And once it gets going, there’s no stopping what you can do.

New York Life, the biggest life-insurance company in the U.S., wants us to “Keep Good Going,” as in “It takes all kinds of good to make a family.”

[UPDATE: Videos no longer embeddable, but you can see new ones at the Keep Good Going link.]

Good is, of course, a legitimate noun as well as an adjective: “the greater good”; “packaged goods”; “the good, the bad, and the ugly.” But Chobani, Naked Juice, Blue Diamond, and New York Life want us to think of good as a nounified adjective, the better to force an association with originality and playfulness – or simply to make us stop and pay attention.

This part-of-speech switching, also known as anthimeria, has become an established feature of contemporary advertising. If the trend continues, it’s possible to envision a future in which all adjectives have become nouns, all nouns have become verbs, and every adverb has been pressed into service as the name of a startup.

Posted at 08:42 AM in Anthimeria, Food and Drink, Slogans and Taglines, Trends | Permalink

"Just add good" seems like a pretty counterproductive slogan. It's not in there to start with? I've got to add it? I'm going to look for something that already has the good in it.

David C: I think the yogurt is supposed to be the "good" that's added to the main dish. As the awkwardly phrased copy in the first screengrab says: "Simply substitute conventional ingredients with our rich, creamy Greek yogurt."

I had the same reaction as David. "Just add ..." is a known formula. "Instant ___: just add water." In my opinion, that's a bad strike against this bit of writing, worse than the charge of tedious trendy nounification.

As for "substitute ___ with" where I would expect "substitute ___ for", well, it startles me every time I see it, but I think it may be perfectly normal for many speakers/writers of English. I seem to remember that it was discussed at LanguageHat a few years ago. (I'm not saying anyone has to like it. I don't like it myself.)

Empty: Well, maybe that's why Chobani has abandoned "good" and taken a shine to "real."

Am I right that, whereas Diamond Nuts owns Emerald Nuts, there is no connection with Blue Diamond Almonds?

I loved the acrostic E-M-E-R-A-L-D-N-U-T-S campaign of a few years back. There will never be a better ad for a nut.

will there be added comppund noun REAL GOOD soon?

Maybe an organic desserts place could claim it's Realing the Good.