« Best Usage Question Ever? | Main | Book Review: How to Not Write Bad »

Brand Name from the Past: Sorosis

I learned about the defunct American shoe brand Sorosis from Manolo the Shoeblogger, who posted this 1905 ad on his blog last year: 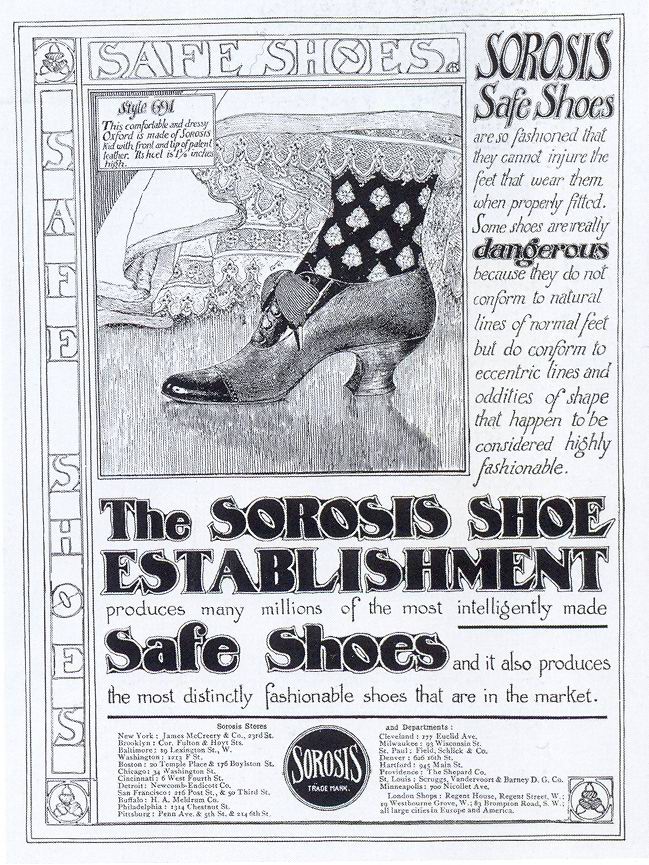 Manolo was interested in the style of the shoe; my own interest is in the Sorosis name. How did a word that sounds like a disease (cirrhosis? psoriasis?) become a brand of “the most distinctly fashionable shoes that are on the market”? Was there a relationship, I wondered, between Sorosis and “sorority”? Or with the Sorosis clubs for professional women, which had been founded in New York in 1868 and are still thriving in some U.S. cities?

Or maybe (I wondered whimsically) with Yiddish tsuris?

Here’s what I found out.

Sorosis shoes were manufactured by A. E. Little & Co. in Lynn, Massachusetts. In the late 19th and early 20th centuries, Lynn was “the shoe-making capital of the world,” thanks largely to Jan Matzeliger, inventor in 1882 of the first shoe-lasting machine. Matzeliger was born in Dutch Guiana (now Suriname) to a white Dutch father and a black Surinamer mother; he left Suriname at 19 and eventually landed in Lynn, where he found work in a shoe factory. At the time, shoes were cut by machine but finished by hand; a skilled shoemaker could make 50 pairs in a ten-hour day. Matzeliger’s machine could make 150 to 700 pairs a day. The dramatic increase in productivity cut the cost of shoes in half.

A. E. Little introduced the Sorosis brand in 1897; a 1922 magazine advertisement claimed that Sorosis was “the first women’s shoe to be branded with a trade-mark,” an assertion I’ve been unable to confirm. (The only “Sorosis” mark in the USPTO database, live or dead, is for a dermatological cream.) 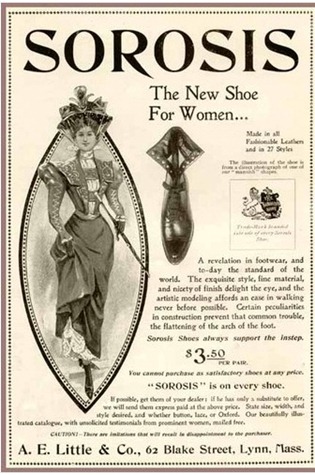 Sorosis shoes eventually became so popular that the company opened its own retail stores. The Pittsburgh Gazette-Times reported on the opening of one such shop in April 1914:

The opening of the new Sorosis shoe store for women at the Penn avenue side of the Jenkins Avenue Arcade Monday was an epoch making event in the retail shoe trade history of this city. The store was crowded to its capacity all day, more than 4,000 persons, representing many of the best families of Pittsburgh having responded to the invitations sent broadcast to attend the gala event by the management. … The very atmosphere of the place was surcharged with an intangible spirit, or galvanic force, that set everyone at ease and “made the whole world kin.”

The article went on to praise “…the magnificent and varied stock with which the store is crammed to plethoric fullness.”

(Reading those passages, one begins to understand why William Strunk felt obliged to include in The Elements of Style—originally published in 1919—a section headed “Omit Needless Words.”)

Back to my original question: Where did the Sorosis name come from?

Sorosis, it turns out, is a botanical term meaning “a fleshy multiple fruit” such as a pineapple or mulberry. (Plural: sorosises.) It’s derived from a Greek word meaning “a heap” and came into English in the early 19th century. The OED’s earliest citation, from 1831, defines sorosis as “a spike or raceme converted into a fleshy fruit by the cohesion in a single mass of the ovaria and floral envelopes.”

The OED’s second definition for sorosis is “a women’s society or club” (U.S.). It’s “an arbitrary use of the botanical term, adopted as the name of the first club of the kind, founded in 1868.” It’s possible, according to an About.com entry, that the word was chosen for its resemblance to sorority, which is unrelated etymologically to sorosis: it comes from Latin soror, meaning “sister.”

Sorority came into English in the 1530s with the general meaning of “sisterhood.” Its first usage as “women’s society in a college or university” dates back to the 1880s and is generally restricted to the U.S. Dan Goncharoff, posting on the American Dialect Society’s listserv last weekend, was able to antedate the published usage to an 1883 book, American College Fraternities.

It’s the sorority meaning that led to the Sorosis brand name, according to a curator’s notes on the website of Drexel University in Philadelphia. But she gets the etymology wrong, so I hesitate to give her full marks:

The name Sorosis is derived from the ancient Greek word for sisterhood and was also the name of a famous women’s suffrage group of the late 19th and early 20th centuries. Supporters of women’s rights in the early 20th century were often highly fashionable women who viewed clothing as an outward display of their modern views.

The Sorosis brand trail grows indistinct after the 1920s. According to the Metropolitan Museum of Art, which has at least five pairs of Sorosis shoes in its collection, A. E. Little & Co. went out of business in 1934—whether because of a sale, a merger, or Depression hardships isn’t said.

Read my post about another defunct shoe brand, Selz Shoes.