Voting earlier today at their annual meeting in Boston, the members of the American Dialect Society selected #hashtag – “a word or phrase preceded by a hash symbol (#), used on Twitter to mark a topic or make a commentary” – as the 2012 word of the year.

The vote was close and required a runoff:

I followed the #woty12 hashtag to get the details of the vote.

And the selection had a certain meta quality. 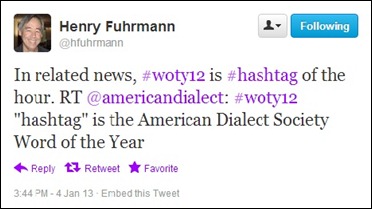 Dennis Baron, who writes the Web of Language blog, was pleased to have predicted the winner.

Nominations for word of the year were taken from the floor. In addition to hashtag and marriage equality, nominees included YOLO (an acronym for “you only live once”), Gangnam style, fiscal cliff, and 47 percent. (Ben Zimmer commented on most of these words in his “year in words” column, published last month in the Visual Thesaurus.)

Conference-goers in Boston also voted on words in several categories:

Most useful: -(po)calypse, -(ma)geddon: “hyperbolic combining forms for various catastrophes.” (For real-world examples, see my 2011 post on Carmageddon and Ben Zimmer’s 2010 column on snowmageddon and snowpocalypse. Yes, it sometimes takes ADS a couple of years to catch on.)

Most creative: gate lice, “airport passengers who crowd around a gate waiting to board.” (This one was new to me and is now my second-favorite airport-related WOTY after 2008’s recombobulation area.)

Most euphemistic: self-deportation, “policy of encouraging illegal immigrants to return voluntarily to their home countries.” (So little love for MOOC! I haz a sad.)

Least likely to succeed: a tie between phablet (see my June 2012 post about the Microsoft Surface and similar devices) and YOLO.

Election word of the year: binders (full of women), “term used by Romney in the second presidential debate to describe the resumes of female job candidates that he consulted as governor of Massachusetts.”

In a separate vote Thursday evening, members of the American Name Society picked their names of the year for 2012. The overall winner was Sandy. (Disaster-related names tend to be popular with the ANS: previous winners have included Fukushima and Eyafjallajökull.) Category winners included Downton Abbey (fictional name), Gangnam (place name), and Malala (personal name).

The ANS also picked fiscal cliff as trade name of the year, which I’m at a loss to explain. The ANS defines “trade names” as “names of real commercial products as well as names of nonprofit or for-profit companies or organizations, including businesses, universities, and political parties,” and fiscal cliff fits into none of those categories. It isn’t capitalized. It isn’t a trademark. It isn’t even a name. In hashtag-ese: #smh.

For the record, my own pick for trade name of the year was FiveThirtyEight. You can read about my other NOTY choices here.

More on notable names and words of 2012 here. And here’s a list of all previous American Dialect Society words of the year. The 1990 WOTY was bushlips, by the way. Everyone remembers that one, right?