« Get It Off Your Chest | Main | Abso-Booking-Lutely »

Picking up on yesterday’s theme of apostrophe’d brand names, here are more examples of squiggles in places you wouldn’t expect to find them. 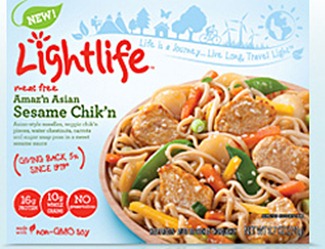 I learned about this frozen product at The Impulsive Buy, which tested it and found it “not amaz’n, but appetiz’n.” The “chik’n” spelling here communicates “just kiddin’ – it’s veggie chicken!” That isn’t a hard-and-fast spelling rule, though. As I wrote in a 2011 post about the names of “further processed foods”: “Chik’n (or chick’n) can be chicken-derived or just chicken-ish. It can come from any of a dozen or so unrelated companies. The only thing the odd spellings guarantee is a certain degree of unnatural-ness.”

For what it’s worth, “amazing” topped the list of Lake Superior State University’s 2012 List of Banished Words, and there’s a thread on Yelp’s Portland (Oregon) site titled “I Hate the Word ‘AMAZING’.”

I’d never heard of Chop’t—the fast-salad chain, not to be confused with “Chopped,” the Food Network program—until I read Matthew Yglesias’s withering comments about it on Slate. (My excuse: there are no Chop’t restaurants outside New York and Washington, DC.) Yglesias is annoyed by Chop’t’s wanton use of “Cobb” to describe any old seasonal salad (see also “Stop the Cobb-sanity”), and I can’t say I disagree. Salad historians tell us that the Cobb salad was invented at the Brown Derby in Hollywood and named for the restaurant’s owner, Robert Cobb; the requisite components are chopped greens, tomato, bacon, boiled or roasted breast of chicken (not chik’n!), hard-boiled egg, chives, Roquefort cheese, and red-wine vinaigrette. Yes, hominy, pepper jack cheese, and pita chips are tasty, but they do not belong in a Cobb salad. (See “Flagstaff Food Truck Cobb” on the current seasonal menu.)

But I digress: my own interest is in “Chop’t,” in which the apostrophe replaces a couple of letters and the T substitutes for D, possibly to approximate the word’s actual pronunciation but more likely because CHOPTSALAD.COM was available for purchase.

The spelling conveys a vague if inaccurate sense of old-timey Britishness. But mostly the apostrophe-t just calls attention to itself, the way gratuitous umlauts in brand names do. (The British do prefer -t suffixes for some past-tense verbs such as leapt, spilt, and learnt. I even came across an argument that dreamt and dreamed have different meanings; this may be true in Commonwealth countries, but not in the US.)

For an even odder example of -ed changing to apostrophe-t, see my 2008 post about “home bake’t delicious muffin.” And for more about “the most misunderstood and misused piece of punctuation in the language,” see The Dreaded Apostrophe.

UPDATE: Commenter Clachnit reminded me of the Kia cee'd, which I wrote about in (can it be?) 2006.

Posted at 09:14 AM in Abbreviations, Food and Drink, Naming, Punctuation | Permalink

The trend has made it to Germany with poncy porridge brand of N'oats. http://noats.de/index.php/noats/ is part of their website - notice the liberal use of English!

Also, I'm not sure how they want this pronounced - notes or an(d) oats - like (rock)'n'roll.

The trendy (or passé) startup names like Flick'r, Tumbl'r, R'dio and so on look rather quaint if you add the apostrophes (I bet there must be some stubborn copy editors who actually would do that...).

Chop't really does have that ye olde flair, doesn't it? On a positive note, I do like "Lightlife" as a brand.

A carmaker has caught on, and "improved" on the apostrophe with an underscore. Behold the Kia Pro_cee'd GT and the Cee'd GT. Small measure of relief: These 2 cars are not coming to the U.S. I fear the unholy underscore would spread. http://www.edmunds.com/auto-shows/geneva/2013/2013-kia-pro-ceed-gt-and-ceed-gt-set-for-2013-geneva-auto-show.html

Does this mean that Pop Tate at Pop's Chocklit Shoppe in the Archie comics has been pushing carob all this time?

"The Dreaded Apostrophe " is wonderfully clear!
Thank you very much .