Do the two words in the title of this post make your skin crawl? Your gorge rise? Then, Gentle Reader, I suggest you watch some cat videos, because today we are in fact going to talk about moist slacks, two of the most loathed words in the English language, according to various unscientific polls.

Please understand that I’m simply reporting the news from U.S. jeansmaker Wrangler, which recently announced the launch of Denim Spa, a line of slacks – OK, denim slacks, aka jeans – infused with moisturizing ingredients “to protect your legs from the dehydrating effects of denim.” Denim dehydrates? News to me.

(Tangentially, I’m sad they didn’t call it “Denim Oasis.” I was all set with jokes about palms and dates and the toes of camels.)

Wrangler, which has been around since 1947, has traditionally catered to rodeo cowboys, but we’re not talking Brokeback Mountain and chapped chappies here. Denim Spa is a women-only brand, and it will be sold (at first, anyway) only in the U.K. The line’s official spokesmodel is Lizzie Jagger*, daughter of Mick. “They’re definitely cooler than regular jeans,” coos Ms. Jagger in a promotional video.

The moisture lasts for 15 days, after which the wearer can replenish it with a “reload spray.” One of the formulas, Smooth Legs, is supposed to fight cellulite, which is a marketing word that means “bumpy fat.”

(Sodden afterthought: What if fashion brand Superdry started selling moisturizing jeans? Would they be labeled Supermoist?)

Setting aside the desirability of jeans that require regular lube jobs, let’s tackle the big question: What is it that people detest about moist and slacks and other “least favorite words” like vomit, panties, goiter, and ointment? In “Words We Love to Hate,” published on the Visual Thesaurus, Ben Zimmer speculated:

It’s difficult to find any unifying thread for these words that get people’s goat. But much like the enjoyable words on the “favorites” list like serendipity and mellifluous, there's a certain sound/sense combination that sparks these word aversions. Why does moist merit a Facebook group of haters, while hoist and joist go unnnoticed? It’s more than just the sound of the word: the disliked words tend to have some basic level of ickiness.

Ointment and goiter share the “oi” sound with moist: there must be something about that diphthong that gets under people's skin.

Still, context counts. For some reason, we may give a pass to moist if it modifies cake, as in the Duncan Hines tagline:

“So moist. So delicious. And so much more.”

And skin-care companies haven’t perceived a need to replace “moisturizer” with a less icky word, as many pages of Google hits attest.

Likewise, the guys at the construction site near my house seemed unperturbed by the Moistop signs stapled all over the building frame. 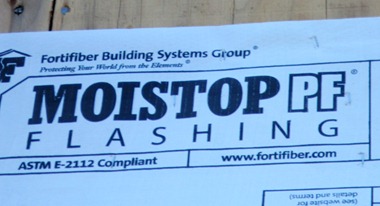 I read first the name as “moist top,” then enjoyed thinking of it as “Moi? Stop?” I finally parsed it the way I suppose it’s intended: as a blend of moist and stop.

* Or Lizzy, as her signature spells it.

(Hat tip to Diane Fischler for the Denim Spa story.)

(....not to mention Duncan Hines's "moistfully good" catchphrase that a jingle has etched into my brain. Please. Not to mention it.)

Dan: Oooh, I hadn't known about "moistfully." I think I love it.

For what it's worth, I'm one of those people who isn't bothered by how words sound. Maybe I am in a tiny minority, but none of the words you listed (and others in the "studies" you linked) don't faze me at all.

And "slacks" surprises me: In the UK, that's what people use to refer to what we Yanks call "pants"—which are underwear across the Atlantic.

I still haven't gotten past the icky-ness of tissues with built-in moisturizer. The jeans would probably make me break out in a rash.

Moi? Stop? I KNOW I love that!

As for moisturizing jeans, I confess that mile-high living makes me painfully aware of the need for any and all sources of rehydration. Still, I have trouble believing that moist slacks are the solution. Somehow I envision a terrifying explosion of contact dermatitis or worse from oil-saturated clothing next to my skin.

"Slacks" offends me, but not in an icky way, just in a "who talks that way?" way. It makes me think of the character Mark in "Mad About You".

Anyway, the next time I get an indelible spot of oil on my T-shirt while cooking I'll consider thoroughly greasing the whole shirt instead of relegating it to the rag bag or the only-on-weekends pile.