Words of the Year 2012: Fritinancy Edition

Meanwhile, we struggled to remember the fiscal definition of sequestration – not to be confused with jury sequestration – and marveled at all the people looking up socialism and capitalism in Merriam-Webster’s online dictionary. We shopped for tribal prints and smoking slippers and earnestly practiced chewdaism. We worried about the Rampture and distracted ourselves by GIF-ing compulsively. “YOLO,” we said, shrugging.

But enough runners-up. My list of 14 WOTY nominees follows the jump. I limited my list to U.S. usages, and I adhered to the American Dialect Society’s criteria for selection, which stipulate that nominees be:

In addition, a nominated word can’t be “a peeve or complaint about overuse or misuse.”

Bath salts. Not the “Calgon, take me away” bath additive but a slang term for a type of synthetic amphetamine that in May was briefly implicated in a cannibalism case in Florida (“No ‘Bath Salts’ Found in System of Face-Eating Attacker”). In September, the PBS show News Hour devoted a five-minute segment to these “trendy designer drugs” that “are packaged to look like common household products with names like Lady Bubbles or White Dove.” My nomination for Euphemism of the Year.

Bully. Not “bully pulpit” or “bully for you” but the taunting, harassing “bully” that was much in the news this year. The federal Department of Health and Human Services launched a new StopBullying website. A documentary called Bully was released in theaters, and a companion “Bully Project” website urged action. The Oikos University shooter allegedly did the deed because he was bullied for his poor English skills. “Brand bullies” and “trademark bullies” were reprimanded. That’s a lot of bad press for a word that originally meant “friend,” “companion,” or “lover,” according to Oxford Etymology’s Anatoly Liberman.

Epistemic closure. That “la-la-la-can’t-hear-you” mindset also known as “willful ignorance,” “groupthink,” and “denial.” Frequently seen in coverage of the Republican defeat in November. I explained it at some length in a November post.

Ermahgerd. “Oh my God” uttered through an orthodontic appliance. 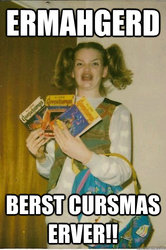 The meme – also known as “Gersberms” (Goosebumps) and “Berks” (books) – was born on March 14, 2012, when this (uncaptioned) photo was submitted to the /r/funny subreddit. It quickly acquired a caption: “GERSBERMS / MAH FAVRIT BERKS.”

As it spread, it merged with another popular meme, LOLCats.

Fiscal cliff. The presumptive WOTY frontrunner: a scary metaphor for the mandated tax hikes and spending cuts that will occur if Congress doesn’t come up with an alternative plan. For more on the term, read Ben Zimmer’s Word Routes column and Stan Carey’s post on the Macmillan Dictionary blog.

Gaylo. Newsweek editor Tina Brown’s coinage for the rainbow-colored halo over President Obama’s head on the cover of the May 21 cover. No, Obama isn’t gay; the magazine was trumpeting his stated support for same-sex marriage. My nominee for the word that’s Least Likely to Succeed. Hey. The one-word subject line on a series of fundraising emails from the Obama campaign. Post-election analysis revealed that the “hey” emails were more successful than any of the others. I wrote about “hey” and other campaign lingo in a May column for the Visual Thesaurus. Also noteworthy: the “Hey girl” meme starring “feminist Ryan Gosling.”

Hoodie. In February, 17-year-old Trayvon Martin was shot and killed in Sanford, Florida, by a neighborhood-watch coordinator empowered by the state’s “Stand Your Ground” law. Martin was unarmed and wearing jeans and a hooded sweatshirt. The hoodie became symbolic: news personality Geraldo Rivera asserted that “his hoodie killed Trayvon Martin as surely as George Zimmerman did”; legislators and demonstrators donned hoodies in public protest. But it wasn’t Trayvon Martin who inspired “Hoodiegate” in May: it was Facebook CEO Mark Zuckerberg, who wore a hooded sweatshirt and jeans during a visit to New York to pitch his company’s IPO. Naturally, there was a Zuckerberg’s Hoodie Twitter account.

MOOC. “Massive open online course,” the next big thing in higher education. The word that’s Most Likely to Succeed, for better or worse.

Pink slime. More daintily known as “lean finely textured beef.” The stuff “birthed the great ground-beef scare of 2012,” according to a report in Slate. If there were a Dysphemism of the Year category, this would win.

Slut. On February 29, talk-show host Rush Limbaugh called law student Sandra Fluke a “slut” because she publicly favored insurance coverage for contraception. Two days later, he doubled down on the slur. He eventually apologized, but “slut” coverage lingered in the media for a couple of weeks. Meanwhile, an aide to John Edwards said the former senator had called his mistress “a crazy slut.” Essays on “slut-shaming” proliferated. But the name-calling and tsk-tsking didn’t deter some companies from claiming “slut” in their brand names.

Stockist. My nominee for UK-to-US import of the year. It’s the newly fashionable choice of hipsteresque designers for whom plain Murrican talk like “Where to Buy” or “Retailers” lacks a certain je ne sais quoi. See Mishka NYC, The Hundreds, Billy Kirk, Fiel Shoes, Fathom and Form, RGB Cosmetics, and Remedy Quarterly. Also see Ben Yagoda’s post on his Not One-Off Britishisms blog.

Super-. The prefix of the year, seen in Super PAC (the political-campaign fundraising committees), superstorm (Sandy), and supermajority (what Democrats now have in the California legislature and Republicans have in much of the South and Midwest). Hat tip to Angela Tung, who nominated “super” for Word of the Year and listed several additional super examples on her blog.

Unskew. A perfectly Orwellian coinage employed by a Virginia Republican, Dean Chambers, who created his UnSkewed Polls website to “prove” that Mitt Romney held a sizable lead in the presidential race despite all creditable evidence to the contrary. Chambers’s “unskewing” amounted to putting his thumb on the scale when he suspected the polls, not unlike reality in general, of having a liberal bias. My nomination for Most Outrageous Word of the Year.

Your mileage will almost certainly vary, so leave a comment with your own nomination(s).

Posted at 06:58 AM in Acronyms, British, Economy, Education, Food and Drink, Magazines, Politics, Slang, Word of the Year | Permalink