Word of the Week: Swank

Swank has always been classified as slang. It was first documented in 1809 as a verb meaning “to behave ostentatiously, to swagger or strut”; by the middle of the 19th century it was being used as a noun meaning “ostentatious behavior.” The adjective sense – “stylish, classy, posh” – dates from 1913, but swanky in that sense dates from 1842. In the 16th century, a swanky (noun) was “an attractive young fellow.”

The OED says swank “apparently” comes from Middle Low German and Middle Low Dutch words meaning “flexible, supple, slender.” If so, it’s related to some wonderful-sounding words: swancor, swankel, svangr (Old Norse, “thin, lean”), swange (“the flank or groin”), swink (Old English “labor, toil”), and modern German schwang (“to oscillate” and also “to be in vogue”). It may also be related to Middle High German swanken, “to swing,” which would confirm its kinship with swag and swagger.

The US trademark database lists 44 live trademarks for “Swank,” including Swank Daddys (a musician), Hollywood Swank (furniture), and Baby Swank (bibs and accessories). But when I hear “swank,” this is what first comes to mind: 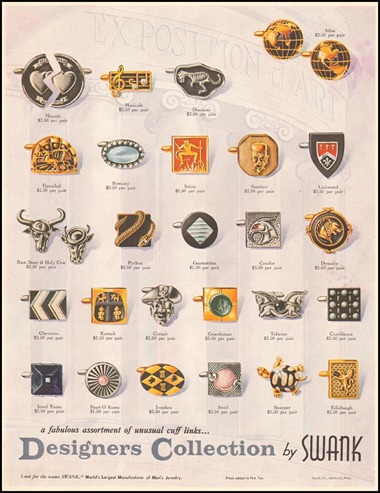 Swank, Inc., was founded in 1897 as the Attleboro Manufacturing Company in Attleboro, Massachusetts. The company made jewelry for women only until 1908, when it added a division, Baer & Wilde, to manufacture men’s jewelry. The new division struggled until 1918, when its “Kum-a-Part” cuff button became a huge success. (Yes, Kum-a-Part. For more early-20th-century brand names with “K” spellings, see my August 2011 Visual Thesaurus column.) The company also made dog tags for World War I doughboys.

“Swank” first appeared in a 1927 ad for a men’s collar holder, “but it was almost another decade before it became the corporate name,” according to a detailed company history on FundingUniverse. In the 1960s and 1970s, Swank, Inc., as it was known by then, acquired several other companies, including Countess Mara and Prince Gardner. 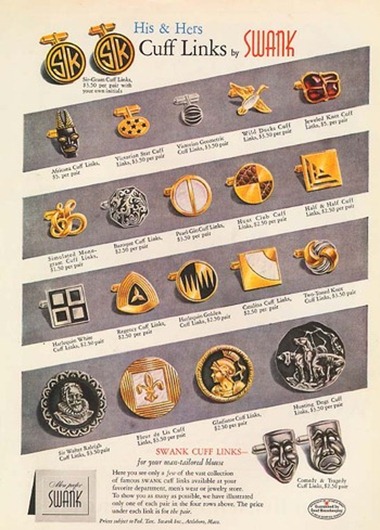 In May 2012, Swank was acquired by Randa Accessories, which owns 75 global brands and has offices in nine countries. The Swank label lives on, along with the gorgeous Art Deco wordmark, although the designs have lost a lot of their former exuberance.

Swank is also the name of a “cocktail and coffee club” in San Francisco’s swanky Pacific Heights.

And Swank is also, of course, a surname.

Read more about swanky at The Word Detective.

Posted at 07:04 AM in Advertising, Branding, Fashion, Naming, Word of the Week | Permalink

also some kind of artsy boutique on Divis: http://swanketyswank.com/