From Bushmaster, maker of the semiautomatic rifle used in the Newtown school shootings last Friday, comes a loathsome and witless online campaign that tests the reader’s “manliness” and awards “man cards” for Bushmaster-approved answers. 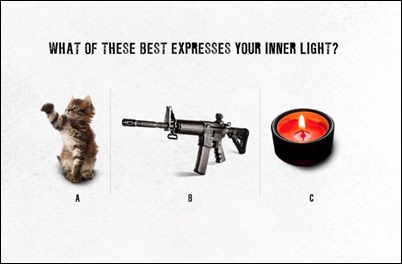 In English, we say “Which of these.” But that’s obviously the least of my complaints here. 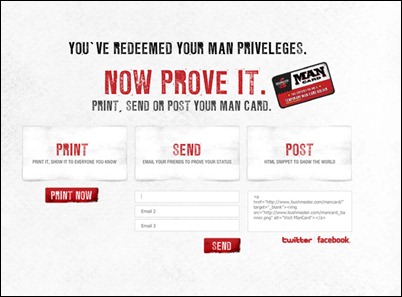 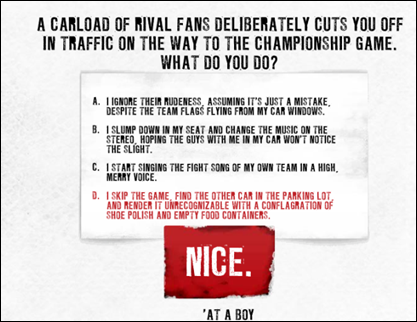 By the way, it’s spelled “attaboy.”

After a blazing round of public shaming, Bushmaster appears to have gone limp and pulled down the campaign. Good riddance.

Overkill from a weapons manufacturer isn’t surprising. But from Auntie Anne’s, the wholesome pretzel franchise in practically every U.S. mall? Brace yourself. 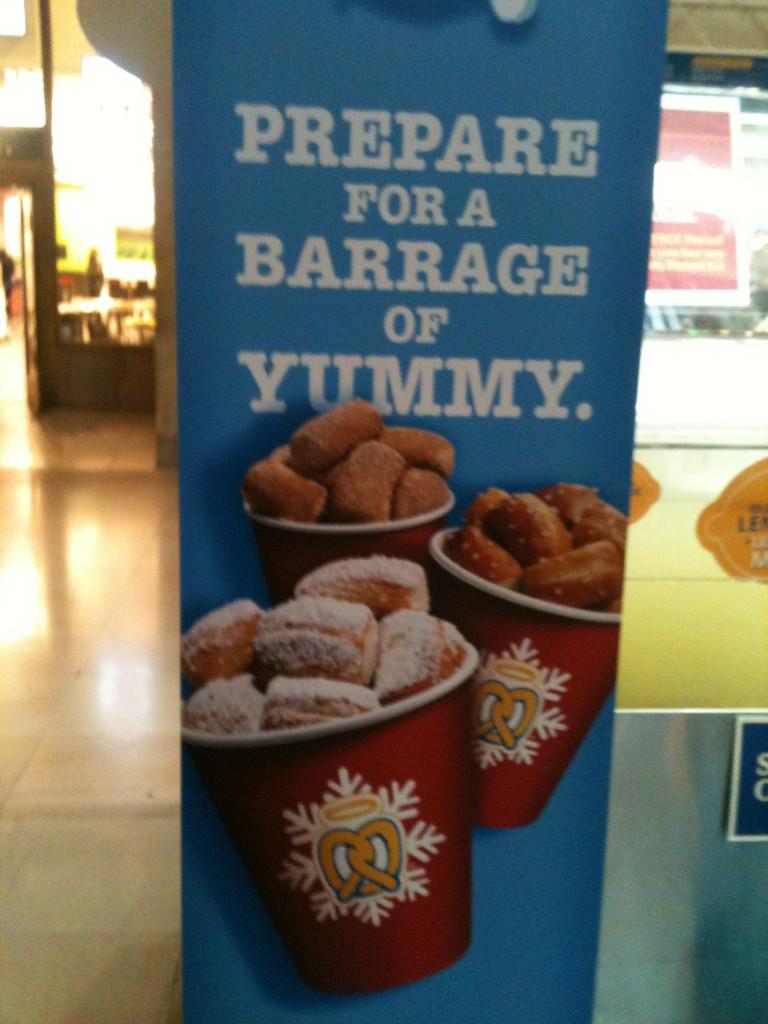 Barrage: A heavy curtain of artillery fire; a rapid, concentrated discharge of missiles, as from small arms.

I’m trying to picture all the people who signed off on “carnage” for this holiday campaign’s theme.

Mayhem: Intentional crippling; the wilful and unlawful infliction of injury upon a person, esp. (formerly) the injuring or removing of a limb rendering him less capable of defending himself against attack. Related to “maim.”

Footnote: Anne Beiler, founder of Auntie Anne’s, is a publicly devout Christian whose memoir is titled Twist of Faith and who has said that Auntie Anne’s was “God’s way of providing her with a platform” for what she calls “the real deal.” I wonder whether Beiler is regretting the 2010 sale of Auntie Anne’s to FOCUS Brands, a division of Roark Capital Group. Does “Roark” ring a bell? I thought so.

Rosetta Stone “tried to create a festive advertisement for their language-learning software and managed to get a three-word sentence wrong in each of three different languages, and two out of the three wrong even on the second try.” (Geoffrey Pullum on Language Log.)

“Let it Schnee, Let it Sneeuw, Let it Snö” – using the noun form of “snow” in German, Dutch, and Swedish, respectively. The ads appeared in London Underground trains.

To its credit, Rosetta Stone later apologized for the error(s): “In a word, we’re ashamed. We tried to capture the spirit and meter of a popular Christmas tune and, regrettably, our enthusiasm for spreading marketing cheer outpaced our respect for linguistic accuracy.”

MUJI, the Japanese “no-brand” retailer with stores in 21 countries, recently opened its first West Coast store in San Francisco’s South of Market neighborhood. This huge screenprinted sign takes up most of the wall behind the ground-floor cash-wrap. 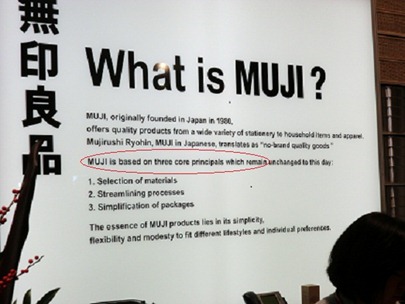 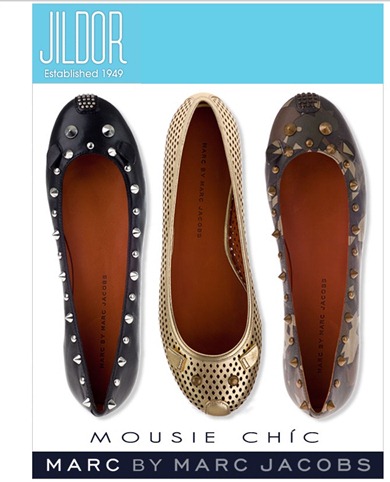 Yes, “chic” is French, but it doesn’t have an accent over the i.

Costco wants you to “protect your families valuables this holiday season.”

If you have the conventional single family, that’s “family’s.” If you like to spread the love around, make it “families’.” Either way, the apostrophe is not optional.

J. Peterman has built its reputation on literate long-form copy, which didn’t prevent this homophonal stumble in the print-on-paper holiday catalog. 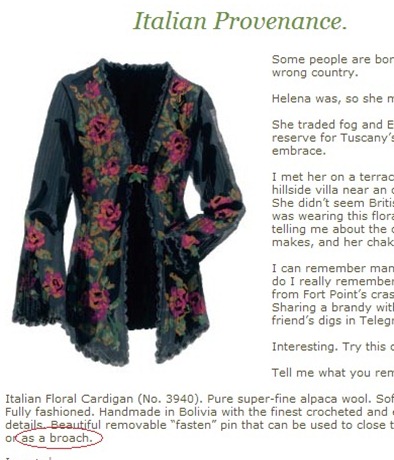 Festivus wouldn’t be Festivus without a “sneak peak.” This one’s from Barnes & Noble. You’d think a bookstore mega-chain would have access to, you know, a dictionary. Or a proofreader.

A printed sign in a “handwritten” font in the window of Chicken Dijon Rotisserie & Grill on Hollywood Boulevard, L.A. Chicken Dijon is a Southern California chain that could afford a proofreader. 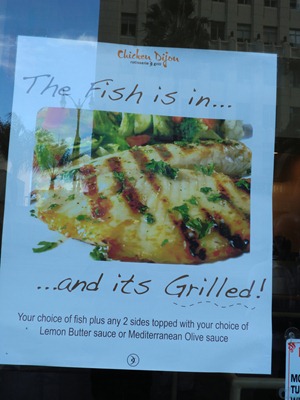 “Fish” and “Grilled” are incorrectly capitalized; “it’s” lacks an apostrophe.

I think these lights flicker, but it’s hard to say for sure. 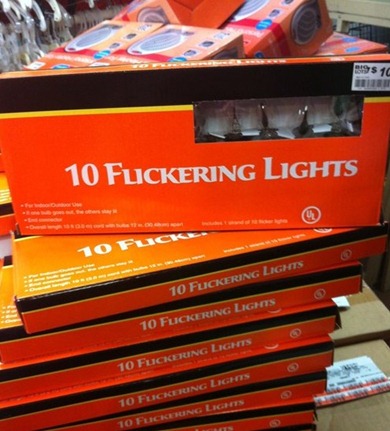 Happy Festivus to the rest of us!

In addition to its terrible spelling, Bushmaster also doesn't appear to understand what "conflagration" means.

Laughed SO hard at the F*CKERING lights!

Oh, I am with you on your 4th, 6th and 7th grievances especially. It's not just the book SELLERS, I've seen the worst homonym confusion on Nook/Kindle books, where there is some disconnect between copy editing and the final, digital page -- but I'm also seeing it in print books as well. My grouchy Festivus grievance is about time and care not taken.

All over book blogs, people talk about "sneak peaks." I make loud and angry noises each time. Sheer/shear I've seen misused in a romance novel, which was funny in an awful way, as was aide/aid. And of course, the ones we all should know -- there/they're/their and its/it's -- those are common misuses.

I know it's annoying to people that I wince at these things, but it's annoying to ME that some perceptions are that things like specificity and accuracy don't matter. THEY DO. Probably my greatest fear is that I'll always be trying to explain why...

Karen: That image and copy appear(ed) in the online campaign, too. It's in the Gawker link that I embedded a little too circumspectly: http://gawker.com/5969150/bushmaster-firearms-your-man-card-is-revoked

I winced at the use of "carnage" to caption a crowd of glamorous short-skirted Santas, the day after the shootings. (I know, prepared long before.)

If I may register a non-grievance, it's that I discovered this website in 2012.

May I please add Karen Kane's confusion of surplus and surplice?
http://www.karenkane.com/store/plus-size-surplus-dress?color=black-cream