Here’s yet another twist on a very familiar snowclone. This variation, on a billboard from the streaming service Roku, brings up some distressing associations. 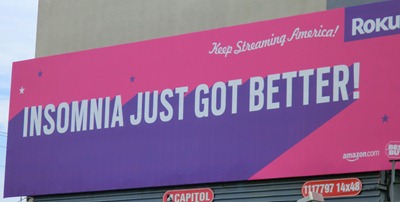 I get it, sort of. If you’re lying awake at 3 a.m., why not make the best of a bad thing? With Roku, you can watch a movie or play a game instead of uselessly counting sheep.

Still, in the conventional “X Just Got Better” formula, “X” = “something good”: “Summer just got better,” “Beef just got better.” The advertised product or service promises to improve on an already good thing. Here “X” is bad, and all Roku can do is make it not quite as bad.

I know, I know. It’s a joke! I should lighten up! Well, sorry: for some of us, insomnia is no laughing matter. I will thank you, Roku, to delete the annoying exclamation mark and change the subject.

Oh, while I’m at it: Yes, there should be punctuation after “Keep Streaming.” It’s that old Donner Party Comma problem again.

By the way, I used to think Roku was pronounced “rock you,” but it isn’t. It’s pronounced “roh-koo,” to rhyme with “beaucoup.” According to a Wikipedia entry, the company was founded in 2002 by Anthony Wood; he named it Roku, the Japanese word for “six,” because it was the sixth company he’d launched.

Other posts in the “X Just Got Y” series here (with examples from Gorilla Glass and many other companies) and here.

Posted at 08:44 AM in Advertising, How They Got That Name, Punctuation, Sloganclones, Snowclones | Permalink

My favorite part of that story is what Roku means! That, to me, is how to get to a great name - kick all the words around that mean something to you, and find the one that works best as a name. It's not random, but it's not obvious. And it's perfectly functional. A real sweet spot! I had the same idea about the pronunciation that you did for a while, but it didn't matter, because I never talked about it with anybody - I only interacted with it online, so the pronunciation was not a big consideration.