« Names in the News | Main | On the Visual Thesaurus: Disruption »

Word of the Week: Fondleslab

Fondleslab: “A touchscreen device, particularly a tablet computer, to which its owner appears unnaturally attached.” – Dictionary of Intellectual Property Law. Coined from fondle (to caress) and slab (a generic, somewhat disparaging term for any rectangular technology device). 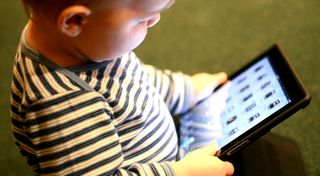 Baby with fondleslab, from The American Genius.

I first encountered fondleslab in Mike Pope’s Evolving English II blog, which last week devoted a post to the term. Mike noted that The Register, which has offices in London and San Francisco and which calls itself “a leading global online tech publication,” may be “the most avid user of the term,” and indeed the earliest citation I could find—October 13, 2010—appeared there. “Jobsian fondle-slab in SEXY FILTHGRAM CRACKDOWN,” reads the headline. Here’s the lede:

Famous fruitbrand fondle-slabbery firm Apple is moving to further bolster family values and hierarchical, authoritarian control - not to mention other rightwing American values such as abstinence from youthful or otherwise unapproved sexy sexuality - by the use of a traditional instrument of The Man's dominance: the US Patent and Trademark Office.

It goes on but does not cool down.

[A] highly idiomatic slang term for a device that holds a powerful attraction for a user or set of users. Here, the word “slab” refers to devices that are often wide and rectangular in form, such as tablet computers.

The, um, informal nature of the term pertains, of course, to fondle. This is technically a neutral term (“touch or stroke tenderly”), but it’s used so often in sexual contexts that it seems to lends a certain impropriety to the term’s use elsewhere.

Fondle came into English in the 1690s, according to the Online Etymology Dictionary; it originally meant “to treat indulgently or with affection,” and acquired the sense of “to caress” in the late 18th century. Fondle was the frequentative of fond, which had been around since the mid-1400s; if you’ve read any Chaucer, you’ll recall that fond originally meant “foolish” or “silly,” a sense that fondleslab may succeed in reviving.

Slab is an even older word: late 13th century (unknown origin), says the Online Etymology Dictionary. A tablet was originally “a slab for inscription.”

Posted at 07:10 AM in Etymology, Neologisms, Technology, Word of the Week | Permalink

I wish that the word referred not to the device but instead to its owner, its unnaturally attached owner--that it was a verb-noun compound in the fine old tradition of shunpike, turncoat, spendthrift, killjoy, ...

@Empty: Also scarecrow and pickpocket. And I just learned a new one via the OED Online's "Insult of the Day": Smellfungus, a discontented person; a grumbler, faultfinder.