Word of the Week: Epistemic Closure

Epistemic closure: In US political debate, a reference to closed systems of deduction that are unaffected by empirical evidence. The term was borrowed from epistemology (the study of knowledge), where it’s sometimes called “deductive closure” and means, roughly, “we know all of the consequences of those things that we know.” The political sense may imply “echo chamber,” “groupthink,” “information bubble,” “false consensus,” “willful ignorance,” or “denial.” 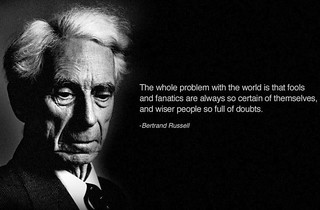 The first political use of “epistemic closure” is usually credited to Julian Sanchez, a research fellow at the libertarian Cato Institute. In a March 2010 blog post, Sanchez wrote:

One of the more striking features of the contemporary conservative movement is the extent to which it has been moving toward epistemic closure. Reality is defined by a multimedia array of interconnected and cross promoting conservative blogs, radio programs, magazines, and of course, Fox News. Whatever conflicts with that reality can be dismissed out of hand because it comes from the liberal media, and is therefore ipso facto not to be trusted. (How do you know they’re liberal? Well, they disagree with the conservative media!)  This epistemic closure can be a source of solidarity and energy, but it also renders the conservative media ecosystem fragile.

The term caught on quickly. In April, political scientist Jonathan Bernstein wrote in his Plain Blog About Politics: “Sanchez's point is that if one only gets information from a narrow set of sources that feed back into each other but do not engage beyond themselves … one will have a closed mind (not his phrase, by the way) regardless of what one does with that information.” (In a comment on another blog, The Philosopher’s Eye, Sanchez explained why he didn’t go with “closed-mindedness”: “I wanted to distinguish the collective/media phenomenon from any kind of individual disposition. The problem … is not that conservatives happen to be individually closed-minded people; the lockdown is at the group level.”)

Later in April, Patricia Cohen of the New York Times provided a summary of the fledgling epistemic-closure debate that quoted, among others, Bruce Bartlett, Jonah Goldberg, and Ross Douthat. Meanwhile, in his Times blog about economics and politics, Nobel Prize winner Paul Krugman noted that epistemic closure is also prevalent in his own field: “And like the political version of epistemic closure, it’s not a ‘both sides do it’ issue. It’s a fresh-water phenomenon; salt-water macro isn’t subject to the same problem.” (Fresh-water and salt-water economics explained here.)

There’s epistemic closure in discussions of climate change, too. And it’s a pitfall to be avoided in branding – a topic I hope to explore in a future post.

“Epistemic closure” got a boost after President Obama’s reelection last week, which appeared to catch many of Mitt Romney’s supporters – including professional pundits – by surprise. In his column for the conservative British magazine The Spectator, Alex Massie rounded up the “howling and wailing and gnashing of teeth” from US conservatives; the headline was “The View from the Cocoon of Denial and Epistemic Closure.” On this side of the Atlantic, David Brooks, the conservative-ish opinion writer for the New York Times, chimed in during a November 9 chat with NPR’s “All Things Considered.” Epistemic closure, Brooks said, “is a very useful phrase these days, believe me.”

BROOKS: Epistemology is the study of what we know, and epistemic closure is being in an information cocoon where you just believe what you want to believe. Confirmation bias is another phrase. And there’s a lot of that going around, not only on Fox News but apparently with Mitt Romney, who we now know was totally shocked. Well, doesn’t he read the newspaper?

For a corrective to epistemic closure of all stripes, I recommend The Righteous Mind: Why Good People Are Divided by Politics and Religion, by Jonathan Haidt, a professor at NYU’s Stern School of Business. It’s about the moral “matrices” that bind us and blind us, liberals and conservatives alike: care/harm, fairness/cheating, liberty/oppression, loyalty/betrayal, authority/subversion, and sanctity/degradation. It certainly challenged my own assumptions. Read a review of the book here. To discover your own degree of epistemic closure, answer the questionnaire at MoralFoundations.org, a group created by Haidt and his colleagues to test theories about morality and social psychology.

Posted at 08:17 AM in Books, Media, Politics, Word of the Week | Permalink

I work in the program risk management business for US DOD. Epistemic and Aleatory uncertainty and resulting risk are our bread and butter. What a great discovery to read about uses of these terms outside our cost and schedule assessments. Thanks.