I’m so used to seeing whom (and whomever) used incorrectly that this correct usage – in a newspaper ad! – actually startled me. 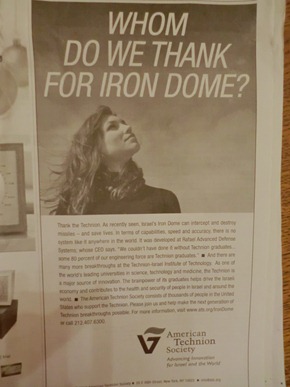 The woman in the photo may appear to be thanking a sky deity, but the copy provides a different answer to the headline’s question: “Thank the Technion.”

The grammatical correctness of “Whom Do We Thank for Iron Dome?” is unimpeachable: whom is the object of thank. But I can’t help thinking it’s a little too correct — stilted, even – given the context.

Iron Dome, in case you haven’t been following the latest Israeli-Palestinian troubles (and who could blame you for tuning out?), is the defensive anti-missile system developed in large part by graduates of Technion-Israel Institute of Technology, with American backing. According to the American Technion Society’s website, Iron Dome “saved countless lives on both sides” in the recent Israel-Gaza conflict. (The James Bond-ish name “Iron Dome” is a beefed-up translation of the Hebrew kipat barzel, or “iron cap”; kipa can also mean “yarmulke.” The English term carries echoes, intentionally or not, of Dome of the Rock, the Muslim shrine in Jerusalem.)

Iron Dome performed better than expected, according to Israeli defense spokesmen, but it’s expensive: each Iron Dome missile costs $50,000. And the rockets it’s designed to intercept, writes Dan Ephron in The Daily Beast, “are manufactured in Gaza at a fraction of the price—sometimes for just a few hundred dollars.”

And while “countless lives” may have been saved, many other lives were lost. Advanced technology or no, war is still hell.

Which is why, even though I acknowledge the correctness of whom in the ad, I think it’s lipstick on a pig. I’d have recast the headline to avoid fussy points of grammar. And while I was at it, I’d have changed the question to a declarative statement.

Additional reading: Is whom obsolete?

Posted at 10:34 AM in Advertising, Grammar, Military, Names in the News, Naming | Permalink

Call me a prescriptivist, but maybe if people used "whom" correctly more often it wouldn't seem stilted. (Every time I check my Twitter timeline I see the helpfully incorrect "who to follow" suggestions.) This headline seems to me the best way to say what the writer wanted to say.

@Chronsnyder: I happen to think "whom" should die a quiet death, but if someone feels compelled to use it, at least s/he should be aware of appropriate register. In the context of the ad -- and of Twitter -- "whom" just sounds prissy. And there's always a clear and grammatical alternative.

Although the interceptor missiles cost on the order of $50k, the money saved by not allowing them to reach populated areas with the resultant destruction of lives and property far outweighs the cost of the defensive missile.