« Word of the Week: Epistemic Closure | Main | The Wordnik Interview »

How Zara Got Its Name

If you’re in North America and have never heard of Zara, it’s probably because you don’t live in one of a handful of cities (Toronto, San Francisco, New York, Chicago, et al.) where there’s a Zara store. In much of the rest of the world, however, the Zara brand is ubiquitous; in fact, Zara is the world’s biggest retailer. It earned that title by specializing in “fast fashion”: quickly produced, quickly distributed, and quickly replaced imitations of current trends. In an article for the November 11 New York Times Magazine, reporter Suzy Hansen tours the corporate headquarters of Inditex, the parent company of Zara and several other retail brands that collectively make about 840 million garments a year and have about 5,900 stores in 85 countries, “though that number is always changing because Inditex has in recent years opened more than a store a day, or about 500 stores a year.”

So where did the Zara name come from? 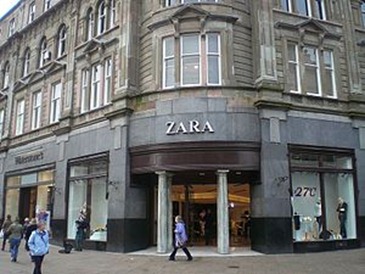 The first Zara store opened in 1975 in La Coruña, a small city in Galicia, in the northwest corner of Spain. Founder Amancio Ortega Gaona, who is now 76 and ranked the third-richest man in the world, wanted to call the store Zorba, after the 1964 film Zorba the Greek:

“I don’t think they were thinking of making history, just that it was a nice name,” [Inditex communications director Jesus] Echevarría said. “But apparently there was a bar that was called the same, Zorba, like two blocks away, and the owner of the bar came and said, ‘This is going to confuse things to have two Zorbas.’ They had already made the molds for the letters in the sign, so they just rearranged them to see what they could find. They found Zara.”

A few other tidbits of interest from the story:

My own naming notes:

* Isn’t every price “accessible” (or “affordable”) if you have enough money?

Posted at 07:58 AM in Fashion, How They Got That Name, Retail, Spanish | Permalink

I found some information on oysho, in Spanish, in the Inditex website (http://www.inditex.es/es/descargas?file=oysho.pdf). Here is a *very literal* translation of its key points: the name oysho is the result of a “creative exercise” and does not have any specific meaning in any language but it can be easily used worldwide. Just one word summarises the oysho concept – simplicity, versatility and design.
The word was chosen also because of its “graphical potential” – its visual image can be read from any angle [try looking at it upside down] and the short, simple and direct brand name communicates the same “cleanness and elegance of shapes” of its outlets.

According to a short article titled ¿De dónde viene el nombre Bershka?, also Bershka is an invented name, chosen because it sounds well and it can be easily pronounced in different languages.