How Twinkies Got Its Name

Hostess Brands Inc., the 82-year-old snack-foods company based in Irving, Texas, announced today that it will close its plants and fire all 18,000 of its workers. The company had filed for Chapter 11 bankruptcy protection in January. The corporate website says the company “was forced by a Bakers Union strike” to shut down. The union says the claim is false.

Hostess—founded in Missouri in 1930 as Interstate Bakeries Corporation—had been the largest wholesale baker and distributor of baked goods in the United States. Its many brands included Wonder Bread, Dolly Madison, Ho Hos, Sno Balls, Ding Dongs, and Colombo, but the company’s most famous product name may have been Twinkies, the “golden sponge cake with creamy filling” with a seemingly limitless shelf life.

Why was it called “Twinkies”? Serendipity. 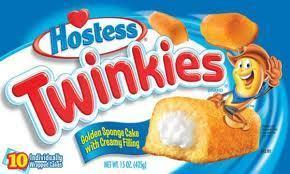 According to a Chicago Tribune story, the first Twinkies “bounced out of the ovens at Continental Baking Co.” in River Forest, Illinois, in 1930:

Plant manager James Dewar was looking to create a cheap, two-for-a nickel snack. So he grabbed some shortcake pans and got cookin’. Dewar got the name from a billboard for Twinkle Toe Shoes. He shortened it to Twinkies, and the rest is snack food history.

That history took a grim turn during the 1979 trial of Dan White, the San Francisco supervisor who assassinated Mayor George Moscone and a fellow supervisor, Harvey Milk. White’s defense lawyers argued that their client’s mental capacity had been damaged by his excessive consumption of junk food. No specific food product was ever mentioned in the courtroom, but reporters coined “Twinkie defense” as shorthand for the argument. The term survives “as a derisive term for an improbable legal defense” (Wikipedia).

The sausage-shaped character on the Twinkies package has a name: Twinkie the Kid. A registered trademark since 1971, it was used in commercials and in collectible products, which are probably going to become a little more collectible.

Today’s Chicago Tribune has a slide show of 15 “iconic” Hostess products, including Holsum bread, which at one point used this dandy slogan: 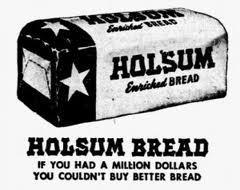 “If you had a million dollars you couldn’t buy better bread.”

According to a Wikipedia entry, “Holsum” was used by many retail bakeries in the early 20th century, when whimsical phonetic brand spellings were all the rage. (See my August 2011 Visual Thesaurus column, “Phood for Thought,” for more examples.) In 1908, the W.E. Long Company of Chicago acquired exclusive rights to the name. Holsum bread is still sold; its mascot, Mr. Slice, was created in 1976.

Posted at 09:04 AM in Food and Drink, History, How They Got That Name, Mascot, Mister, Names in the News, Naming, Slogans and Taglines, Trademark | Permalink

I expect most of these brands to return under new ownership eventually.

Prepackaged commodity bread around here is usually Wonder, Sunbeam, or regional brands Mrs Baird's and Rainbo. (Mrs Baird's is owned by the US branch of Mexican baker Bimbo, which also produces Thomas' English Muffins. In Mexico, Bimbo owns the Wonder name.) And every chain store has its own line of bread.

Tomorrow I will drop by Sprouts and pick up a loaf of Sweet Paradise cinnamon bread, imported from remote Hayward, California. Six bucks and worth every cent.

BTW, Bimbo Bakeries USA is the largest bakery in the US. In Spanish, bimbo ("beembo") is an affectionate term meaning "baby"; it has none of the negative connotations of the American slang word.

I had no idea they'd become the biggest, though I knew they were Up There. Whether this makes them the first choice for picking through the remains of Hostess, I have no idea.

P. G. Wodehouse's characters use the word "bimbo" in a faintly derogatory but gender-neutral way. Whether this is old US slang or old British slang I do not know.