You know by now that President Obama was reelected yesterday. Here’s some other election news from Twitter and the blogs – with special attention to language-y, name-y tidbits.

Josef Fruehwald is a linguist in Philadelphia. More on “vote” as a mass noun in this Mr. Verb post.

Nate Silver is, of course, the stats whiz at FiveThirtyEight, the New York Times’s blog about political polls. The cryptic joke here is in the tweet’s syntax, which pretty accurately represents a Times predilection. Last week Twitter turned that tic into a game, #nytbooks.

Tunku Varadarajan is the editor (“for a few more days”) of Newsweek International.

Nate Silver’s predictions turned out to be so eerily accurate that the Is Nate Silver a Witch website had to make some changes. 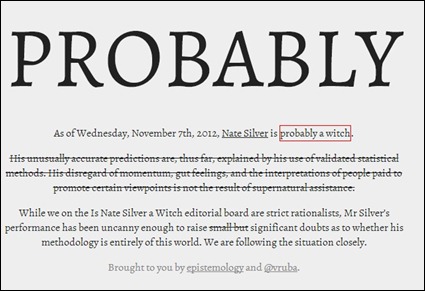 There was big news in local elections, too.

Negropolitan’s slightly cryptic reference is to Colorado’s passage of Amendment 64, which legalizes the use of recreational marijuana. –sterdam has become the de facto suffix for “legal pot,” in tribute to Amsterdam. (See Hamsterdam and Oaksterdam). The ver-ster combination makes this coinage especially hilarious, at least to me. 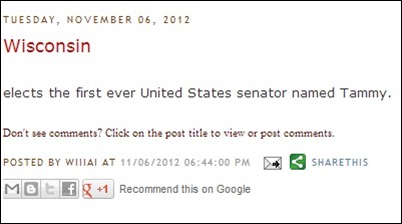 From the Whatever It Is, I’m Against It blog.

Of course, Tammy Baldwin made history for a much more significant reason: she’s the first openly gay person to be elected to the US Senate. But she won’t be the only Tammy in Congress: Tammy Duckworth won her contest in Illinois’ 8th District, defeating Joe Walsh. UPDATE: Read Laura Wattenberg’s analysis of the name Tammy at the Baby Name Wizard blog.

There was naming news in Florida, too.

Thank you, Bryan King, for inserting just the right note of absurdity into the celebration.

Posted at 08:05 AM in Grammar, Humor, Naming, Politics, Twitter | Permalink