Few German words are as popular or linguistically productive in the US as “Oktoberfest.” Here are some local variations on the theme, along with several out-of-town sightings.

Oakland’s fifth annual Oaktoberfest will be held on Saturday, October 6.

“Oaktoberfest” works very well orthographically—just add A. “Oakland” has also been rejiggered into Oaklandish (an apparel brand that “supports and represents” Oakland) and Oaksterdam University (“Quality Training for the Cannabis Industry”), named in honor of Amsterdam, where marijuana use is legal.

Sharktoberfest is an annual tradition at  the California Academy of Sciences in San Francisco’s Golden Gate Park. The event celebrates “two perennial favorites—sharks and beer!” 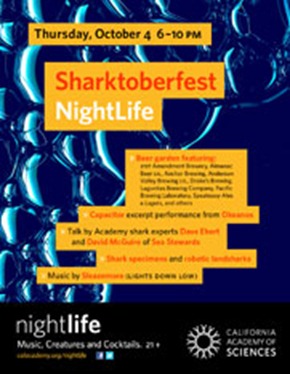 I love the Academy but can’t help wishing Sharktoberfest were taking place in Boston, where the native nonrhotic rendering of the word would create a better rhyme with “Oktoberfest.”

Book’toberfest is the first annual (their presumption, not mine) book fair and local-beer tasting at San Francisco’s Mechanics’ Institute Library. It’s scheduled for October 5 and promises to “put the ‘pub’ back into ‘publishing’!” 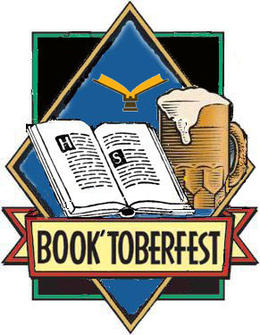 And also the apostrophe into “Book’toberfest,” for reasons unclear to me. It interrupts the otherwise perfect Oktoberfest portmanteau.

Moving away from the bay, Buffalo’s Booktoberfest—no punctuation, thank you very much—was held September 13. The event was “an evening of bratwurst and brews, all in the name of literacy.”

Watchismo—nice name, by the way—is celebrating Clocktoberfest with 25 percent discounts on most German-made watches. Note the German-flag colors and the echt Fraktur type, or something close to it.

Baracktoberfest is a Kickstarter project that celebrates the brewing of beer at the White House; the money goes to creating T-shirts, pint glasses, recipe cards, and postcards. (For more about the beer, see the last item in this August post.) The $300 goal was met in two and a half hours, and the project ultimately raised almost $3,000. 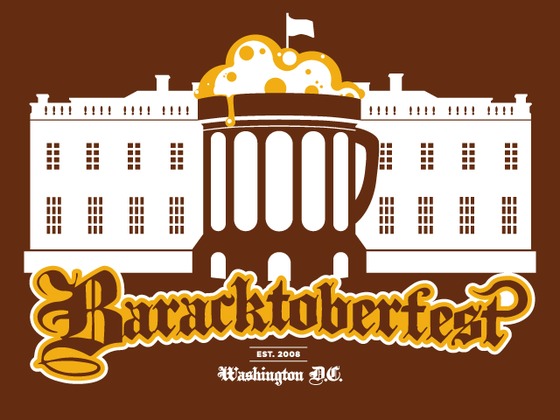 “Est. 2008” apparently refers to the year Obama was elected, not the year the project began.

The project’s creator, Matthew Potter, wrote a nice statement of purpose that begins:

First and foremost: This isn’t about politics. This is about portmanteaus and alcohol. If that’s not enough to get you excited, then I don’t know how you get out of bed in the morning. 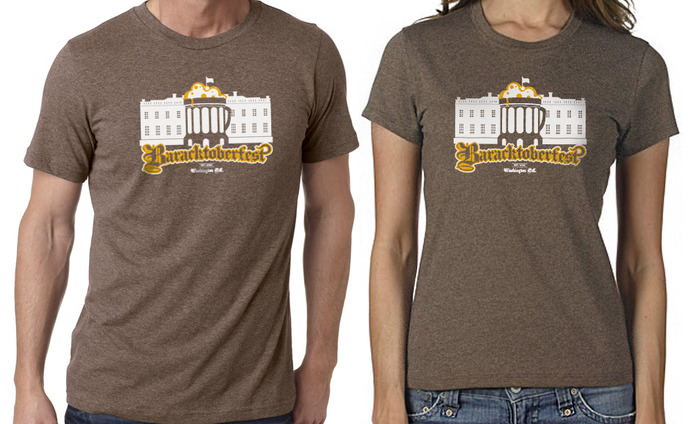 During the 2008 presidential campaign Schlafly Beer in St. Louis produced a Baracktoberfest brew (and a Palin ale). This year, with one of the candidates a teetotaler, Schlafly appears to be abstaining.

I can’t resist including SocktoberFest, coming up this weekend in Osage, Iowa. It’s sponsored by a local company, Fox River, “maker of the famous Original Rockford Red Heel Monkey Sock”—de rigueur for all your sock-monkey needs—and the press release has this adorable lede: “Thousands of bargain shoppers will get to experience that new-sock feeling after SocktoberFest…”

UPDATE: The Pr*tty Sh*tty blog, which reviews examples of good and bad design, is observing Ktoberfest, “a weeklong celebration of the letter K” in logos.

UPDATE 2: Via a tweet from Our Bold Hero, Spocktoberfest, #1 on Cracked’s list of  “holidays they need to invent.” 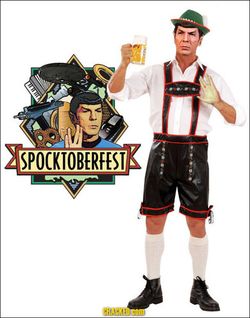 Traditional Oktoberfest—the one in Munich—takes place from late September to early October. In the US, such calendrical strictures are often flouted: see Maytoberfest, Novemberfest, and Augtoberfest. Wondering how the original Oktoberfest came to be? Here you go.

And check out the comments below for additional -toberfests.

Australians currently have an obsession with themed fundraising months. In October you can participate in:

Also, when I was a kid, local rock radio station MMM would have Rocktober every year.

I have fond memories of a sign (seen many years ago) in Rochester, NY:
"Oktoberfest: August 3rd" etc etc.