Word of the Week: Postapocalit

Postapocalit: “Novels set in an imaginary North American wilderness after the unthinkable happens” (John Seabrook, “Love Among the Chickens”). A blend of postapocalyptic and lit, short for literature.

“Postapocalit” appears to have been coined very recently – last week, to be precise – by New Yorker writer John Seabrook. In his October 26 post for the magazine’s Page-Turner blog, Seabrook writes that he’s “been reading a lot of postapocalit.” He explains:

While the category is new, the genre isn’t; it goes back to Stephen King’s 1979 novel “The Stand,” and beyond, to sci-fi classics like “On the Beach,” “I Am Legend,” “Day of the Triffids,” “Planet of the Apes,” and the forgotten “Alas, Babylon,” by Pat Frank. The genre was revitalized by Cormac McCarthy’s 2006 novel “The Road,” which made postapocalit safe for serious fiction, and recent years have brought several estimable contributions to this corner of my bookshelf, including Suzanne Collins’s “Hunger Games” trilogy, Justin Cronin’s “The Passage,” (the recently published sequel, “The Twelve,” is on my digital beside table), and Peter Heller’s wonderful “The Dog Stars,” which is my subject today. 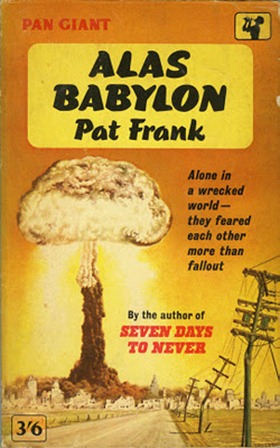 Posted at 07:32 AM in Books, Disasters, Neologisms, Portmanteaus, Trends, Word of the Week | Permalink

Procedurals in that era? You know it: postacopalit.

Another great one is "Earth Abides" by George R. Stewart, or at least, it was when I was 10. I just began to re-read recently, and so far, it's holding up very well. I hated "The Road", reading it felt like being lashed in the eyes. I don't think I'd risk reading anything else he wrote after that.

David R.Palmer's 1983 novel, Emergence is a good book on the subject. Now we need a word for publishers who promise new books by Palmer for YEARS -- & go out of business without giving us what we crave!

Let's not forget "A Canticle for Leibowitz" by Walter M. Miller, Jr.