Word of the Week: Malarkey

Malarkey: Nonsense, horsefeathers, bushwah, humbug, bunkum, rubbish, twaddle, exaggeration, lies. Originally US slang, first seen in print in 1924 in the Indiana Gazette (“The rest of the chatter is so much malarkey …”). Its origin is unknown; attempts to connect slang malarkey to the Irish surname Malarkey or to modern Greek malakia (“soft”) have proved fruitless.

Malarkey was all over the news after last Thursday’s debate between Vice President Joe Biden and his Republican challenger, Congressman Paul Ryan. Biden used the word twice: “With all due respect, that’s a bunch of malarkey” and—clarifying his characterization of Ryan’s comments as “a bunch of stuff”—“We Irish call it malarkey.”

Malarkey was the most looked-up word after the debate, according to Peter Sokolowski, a lexicographer at Merriam-Webster. It is the 2012 campaign’s quaint-euphemism equivalent of 2008’s cockamamie, which GOP candidate John McCain used in reference to … Joe Biden. 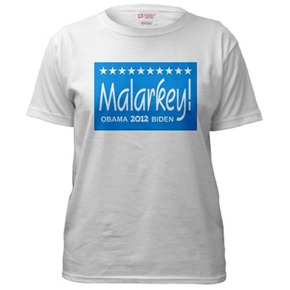 On Friday, the Visual Thesaurus devoted a column to malarkey. “Biden certainly knows his way around a colorful Irish expression,” wrote Ben Zimmer:

The word malarkey, meaning “insincere or exaggerated talk,” originally found favor in Irish-American usage, though its exact origin remains unknown. We can likely thank a cartoonist of Irish descent, Thomas Aloysius Dorgan (“TAD” for short), for popularizing the word. 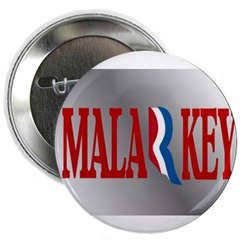 The Atlantic Wire also devoted a column to malarkey. (“Adding a ‘With all due respect’ to the phrase, [Biden] is clearly insinuating, or outright stating, that Ryan’s words are not to be taken as truth, that it’s just a bunch of hooey, right?”) At The Daily Beast, Andrew Sullivan called malarkey “literally, the word of the night.” (The “literally” was a sly reference to Biden’s repeated use of that word in his Democratic National Convention speech.) And in The Economist’s language blog, Johnson, Robert Lane Greene said he was skeptical of the Irish-origin story: “Giving English words Irish etymologies is a proud Irish and Irish-American pastime,” he wrote, adding, “Whether malarkey’s putative Irish origin is malarkey, bunkum, hokum or legitimate may be lost to history.” 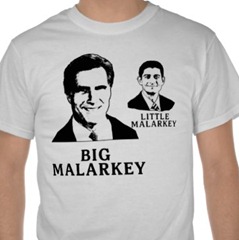 By Friday morning the Obama campaign had embraced malarkey:

And a hyperkinetic gif made malarkey mesmerizing.

Although malarkey has American roots, it occasionally shows up in the UK. Helen Dunmore, a British poet and novelist, titled her recent poetry collection The Malarkey. (“You looked away just once / as you leaned on the chip-shop counter, / and forty years were gone. / You have been telling them forever / stop that malarkey in the back there!”)

In the US, malarkey has been used as a trademark, most often as an eponym (Malarkey Roofing Products, Malarkey’s restaurant). But I also found a Malarkey clothing brand, originally registered to a company called Shenanigans. Shenanigans (trickery, skulduggery, a prank, an exhibition of high spirits) is another charming and mysterious American word. It first appeared in print in 1855, in a San Francisco publication called Town Talk; the next two citations (dated 1856 and 1857) are also from California. According to Online Etymology Dictionary, the word may have come from Spanish chanada, a shortened form of charranada “trick, deceit.” Lacking corroborating evidence, though, lexicologists throw up their hands and declare shenanigans, like malarkey, to be “of uncertain origin.”

UPDATE:  Lucy Ferriss considers malarkey at the Chronicle of Higher Education’s  Lingua Franca blog:  “We have waded through misstatements, false claims, and fiery pants. And finally we have arrived at malarkey, which has the extra advantage of being fun to say.”

Posted at 07:49 AM in Euphemisms, Politics, Slang, Visual Thesaurus, Word of the Week | Permalink