Pumpkin ale is nothing new, especially at this time of year. But until recently I’d never seen Punkin Ale. 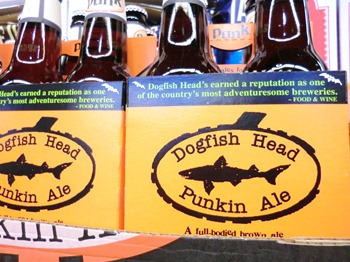 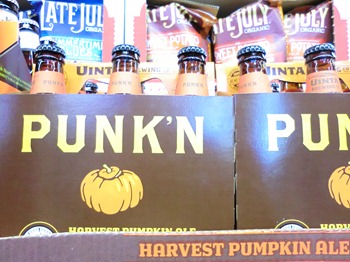 The folksy spellings are a variety of eye dialect, which calls attention to an other-than-dictionary-perfect pronunciation, an uneducated speaker, or a humorous, affectionate register. (For more on eye dialect, see my post about “li’l.”)

“Punkin” has appeared in print since at least the 1880s, when James Whitcomb Riley, “the Hoosier poet,” published his immortal—indeed, unkillable—verse, “When the Frost Is on the Punkin,” which was memorized by generations of schoolchildren. It begins:

When the frost is on the punkin and the fodder's in the shock,
And you hear the kyouck and gobble of the struttin' turkey-cock,
And the clackin' of the guineys, and the cluckin' of the hens,
And the rooster's hallylooyer as he tiptoes on the fence;
O, it's then the time a feller is a-feelin' at his best,
With the risin' sun to greet him from a night of peaceful rest…

Besides punkin/punk’n, I found some other interesting word and name  stories in these beer brands.

Dogfish Head, which is based in Delaware, named its brew after “the seriously off-centered southern Delaware extravaganza Punkin Chunkin.” I think they mean “off-center.” (When you click that link, you’re greeted with the headline “We’re Gonna Hurl!”) Punkin Ale may have been new to me, but it’s been around since 1994.

Uinta Brewing, in Salt Lake City, is named after a mountain range in southeastern Utah. The name—pronounced “yoo-IN-tah”—comes from a Ute word that means “pine tree” or “pine forest.”

Uinta describes Punk’n as “sessionable,” a word I had to look up. It’s not in my standard dictionaries, but according to Urban Dictionary and beer websites it means “capable of being drunk over a long session”—in other words, relatively low in alcohol. Punk’n is 4 percent alcohol by volume, a figure that appears nowhere on the bottle but is reported on Beer Advocate. (Dogfish Head’s Punkin Ale is 7 percent ABV.)

Beer Advocate’s reviewers give Punk’n Ale a solid “meh.” I haven’t sampled it, but I give the brand an A-plus for its striking label design. I also commend the designs for Uinta’s other brews: In addition to Punk’n, Uinta sells beers called Sum’r, Hyve, Wyld, Baba (a black lager with, naturally, a black sheep on the label), and Birthday Suit.

Posted at 07:11 AM in Beer, Design, Naming, Spelling, Words | Permalink