Names in the Wild: Olvera Street

Olvera Street (Calle Olvera) is the oldest street in Los Angeles, dating back to the city’s founding in 1781. Situated opposite Union Station and named for Los Angeles County’s first judge, Agustín Olvera, the street has been a tourist-friendly “Mexican marketplace” since 1930. It’s artificial (the commercial strip was planned and executed by a wealthy Anglo, Christine Stirling) yet also authentic (several historic buildings still stand). In other words, it’s a living metaphor of Los Angeles.

On a recent trip to L.A. I visited Olvera Street for the first time in many years. I found much unchanged (a few establishments, like La Luz del Día restaurant, have been around since the 1950s), while other things have adapted to changing times. 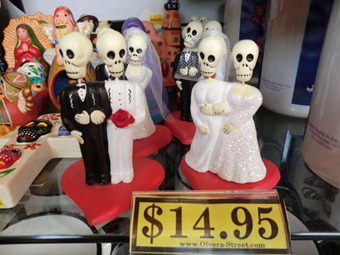 There were lots of Día de los Muertos items for sale, including these same-sex wedding-cake toppers. 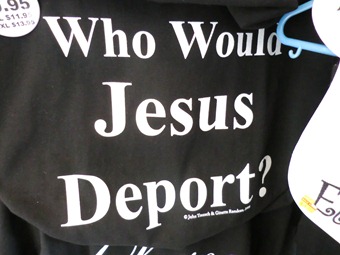 A “Who Would Jesus Deport?” T-shirt. 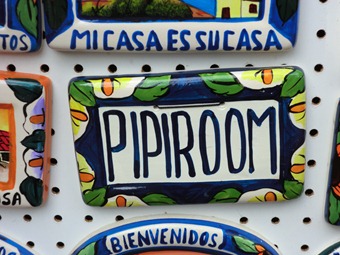 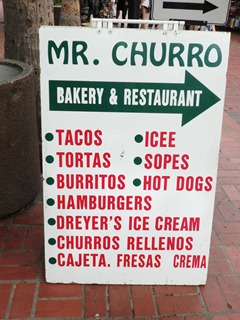 I’m not sure why it’s “Mr.” Churro and not “Señor,” but the name does fit the bilingual flavor of the rest of the sign. And of course I’m always happy to meet a Mr. business name in the wild. 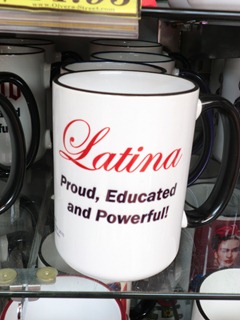 This mug was one of many souvenirs bearing the “Latina – Proud, Educated and Powerful!” motto. It appeared to be a girls-only phenomenon. 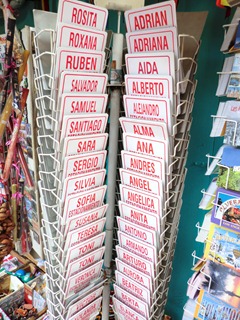 If you haven’t found a parking sign with your child’s name, maybe you’ve been shopping in the wrong place. 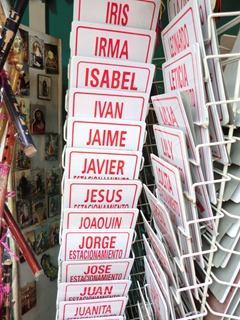 Travel note: I recommend taking one of the Metro Line (rapid-transit) trains into Union Station and wandering around to admire the spectacular Spanish Colonial Revival architecture and décor. While you’re on Olvera Street, allow some time to view the long-hidden fresco by the great Mexican artist David Alfaro Siqueiros (1896-1974). Originally unveiled in October 1932, the painting was whitewashed shortly afterward to obscure its “radical” subject matter. After more than 40 years of planning and preservation work, it reopened to public viewing earlier this month.

Any time I can arrange my travel schedule so I can stop by Union Station and wander around Olvera Street, I'm happy. BTW, that restaurant in Union Station with the rather druggie-sounding name TRAXX? It's surprisingly not terrible.