The first presidential debate will be held tonight, in Denver; the general election is less than five weeks away. So it’s time to ask a serious question: How are the campaigns shaping up tchotchke-wise?

At 7-Eleven stores in 34 states, you can let the caffeine do the talking – and the predicting. And you get to keep your cup as a souvenir. Last Friday, you didn’t even have to pay for the coffee. 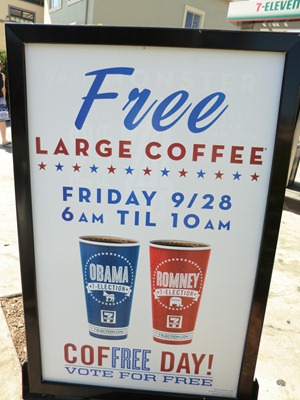 According to 7-Eleven’s 7-Election website, President Obama cups have a substantial lead over Mitt Romney cups everywhere except Idaho and West Virginia.

Berkeley’s family-owned Virginia Bakery is holding its own consumption contest. To cast your vote, buy a photo-decorated sugar cookie.

According to a report on the Berkeleyside news site, the bakery has sold presidential cookies in previous elections, but this is the first time it’s tracking the results. As one commenter observed, “Finally … a chance to eat the rich.”

From tasty to tasteless: 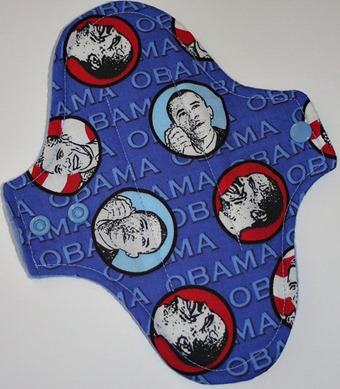 This “Obama reusable cloth pantyliner pad,” sold by Mimi’s Dreams on Etsy, is “the perfect size for teenagers and petite women.” Ladies, don’t you want a muumuu made of that fabric? (Via Buzzfeed.)

Speaking of the curse, here’s SNL’s ad for g.o.b. tampons—made for women by the men of the GOP. (“Now with wings!”)

The brand name is a parody of o.b. tampons, which were developed in the early 1960s by a German gynecologist, Judith Esser. “o.b.” name is an abbreviation of “ohne binde,” German for “without napkins.”

And staying in the nether regions, Say It With a Condom is back with the 2012 edition of candidate condoms.

Obama condoms: “Intended to get the general public laid, not laid off.”

Romney condoms: “For the elitist penis.” Four years ago, according to my notes, it was the Obama condoms that made that “elitist” claim.

A concept only, but what a great concept: Barack Obama, the Blue Note years, from the British pop-culture blog Voices of East Anglia. 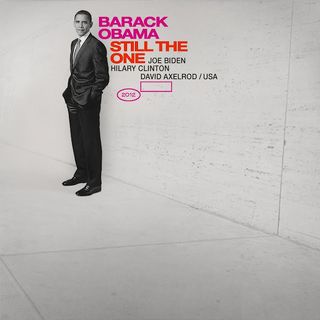 Lots more album covers at the link. (Via Girls of a Certain Age.)

The Sassy Gator, another Etsy seller, is offering this embroidered T-shirt in babies’ and children’s sizes for $20. 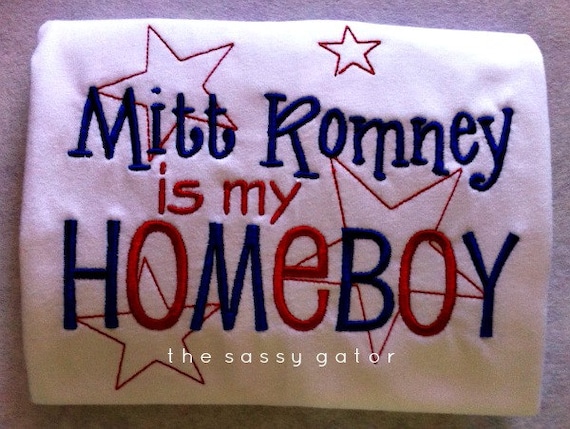 “Mitt Romney Is My Homeboy”

“Homeboy”? Really? A tip for Sassy Gator: Mitt Romney ain’t your homeboy unless your home has a car elevator.

Perfect for serving pupu to your Democratic friends … or crow to the Republicans.

Fishs Eddy is also selling this 10-ounce Barack Obama mug  and a companion Michelle Obama mug. Nothing for the competition except a Republican elephant puzzle. 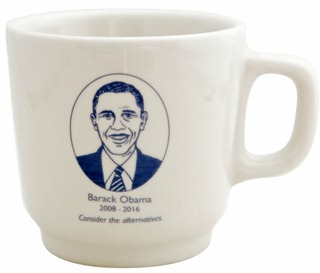 Wish it would all just stop already? I feel your pain. And I have just the remedy: this political ice pack, available at Uncommon Goods. 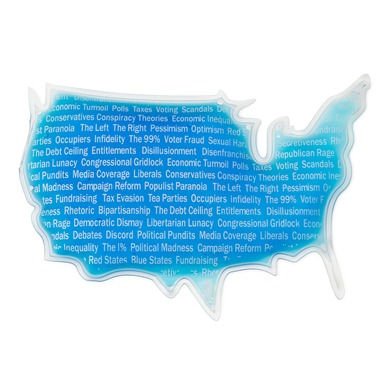 Freeze, use,  repeat until Election Day.

* The story behind the Fishs Eddy name: “It was 1986 and we were driving around the back roads upstate New York (code for lost). We stumbled upon a small hamlet called Fishs Eddy. It was a perfectly odd name so we borrowed it for our just-opened shop near Gramercy Park.”

Posted at 07:56 AM in Advertising, Beer, Food and Drink, Gifts, How They Got That Name, Humor, Maps, Naming, Politics, Tampons, Television | Permalink

We are attending DebateFest at the University of Denver this evening, so stay tuned for branding updates!

Don't know my tampon history, but "ohne Binde" would mean without ties, fasteners or strips of material or something else like that, not "without napkins". (No online dictionary I've checked has "napkins" or anything like it under "Binde".) The word is cognate to English "bind". I'm guessing tampons used to come with some kind of fastener...

Lane: That definition comes from the o.b. FAQ:
"Dr. Judith Esser named the product o.b.®, which stands for 'ohne binde' in German or 'without napkins.' (Sanitary pads are often called binde in Europe.)"

Tampons are an alternative to napkins.