Word of the Week: Smasual

Smasual: A portmanteau of “smart casual,” a British description of a style of dress in which “smart” means “stylish.” In a 2006 blog post about the British meanings of “smart” and “clever,” American-born linguist Lynne Murphy (Separated by a Common Language) defined “smart casual” as “dressed informally, yet neatly and stylishly.”

Smasual is also British. The earliest citations I could find were from 2005, in Urban Dictionary. But I wouldn’t have searched there if I hadn’t encountered the word over the weekend in the Wall Street Journal’s European edition. Here’s Tina Gaudoin on “How to Dress for the Last Days of Summer,” published August 30:

[W]e are fast approaching a time of year which calls for a type of dressing that successful businessmen, in general, do much better than their female counterparts. I don’t speak of office attire, nor of the weekend slouch. Rather, I’m talking about the middle ground—what my 13-year-old son and his friends refer to as “smasual.” 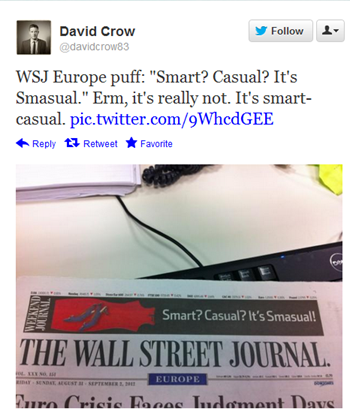 You won’t yet find smasual (or smart-casual) in the dictionary, but it's only a matter of time. I know it sounds like the sort of word that a radio DJ might come up with, but it’s actually an apt term for an incredibly difficult mode of dress. Smasual is the holy grail for those among us who are required to do dress-down Fridays, theater premieres (non-red carpet), midseason dressing, drinks parties (not cocktails), parent-teacher evenings, meet-the-parents evenings (his or hers), second dates, second interviews, third weddings, the christening of fourth borns, retirement soirees and summer funerals. That’s pretty much all of us, at one stage or another.

On this side of the Atlantic, “dress-down Fridays” are “casual Fridays.”

It’s safe to say that the two icons of every look, according to fashion writers everywhere, are Jackie Kennedy and Coco Chanel.

Note: New York’s Fashion Week begins Thursday. To help you figure out what they’re wearing—and saying—read my past posts on fashion and fashion lingo. And here’s my 2010 Visual Thesaurus column on decoding fashionspeak.

Posted at 07:15 AM in British, Fashion, Portmanteaus, Word of the Week | Permalink

What the hell kind of 13-year-old boys would need, let alone use, a word like "smasual?"

I must be so out of fashion; people writing in fashion speak only get confusion, pity or amusement out of me.

Interesting timing -- just yesterday I googled "smart casual" after seeing it as the dress code for an upscale restaurant in Atlanta. I wish I had checked in here, instead. Your post enlightened me far brighter than the first couple pages of Google.

I hope it crosses the pond. While a contradictory/confusing phrase, it has got to demand a better out(fit)come than "dress-down" does.

I like the portmanteau because it evokes "smashing" and, in that way, somewhat clarifies the concept for me. Surely few people would think grungy jeans are smashing.