« Socialist surrealism | Main | I Am Totally Over -ly »

Word of the Week: Arithmetic

Arithmetic: The science of numbers; the art of computation by figures. From Latin arithmetica, originally Greek arithmetike (“the counting art”). In English since early the 14th century, originally as “arsmetrike” because of the false Latin etymology ars metrica, “the art of measuring.” Standardized to arithmetic by mid-17th century. Arithmetic replaced Middle English tælcræft, literally “tell-craft,” in which “tell” meant “to reckon” or “to calculate,” a sense we retain today in “bank teller” and “to tell time.”

Arithmetic was in the news last week after former President Bill Clinton used the word six times in his fact-filled and rousing speech at the Democratic National Convention in Charlotte. 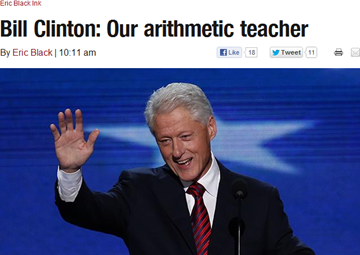 Here’s the first usage (from the transcript of the speech as delivered):

Now, people ask me all the time how we got four surplus budgets in a row. What new ideas did we bring to Washington? I always give a one-word answer: Arithmetic. (Sustained cheers, applause.)

Arithmetic suited Clinton’s rhetorical purposes because—in contrast to, say, math—it suggests “elementary” and “basic.” Arithmetic is what we learn in grade school: it’s times tables, not quadratic equations; long division, not differential calculus. Clinton drove home that point in a later line about his differences with Republican opponents over the national debt:

It was a highly inconvenient thing for them in our debates that I was just a country boy from Arkansas, and I came from a place where people still thought two and two was four. (Laughter, applause.) It’s arithmetic.

If you missed the speech. here’s video with annotation from New York Times reporters.

Clinton made so many changes to his written text—ad-libs and deliberate revisions—that the speech ran almost twice as long as scheduled. To see exactly how he altered the text, take a look at The Atlantic’s marked-up version. BuzzFeed offers a slightly different version, which contains a couple of changes sure to please print editors: Clinton’s correct lower-casing of “president” when it doesn’t precede a proper name (“the next president of the United States”) and of “bless” (“God bless America”).

“Fixin’ to Get Folksy,” an analysis of the speech’s homespun rhetorical devices. (Ben Zimmer at Word Routes.)

Hendrik Hertzberg of The New Yorker says Clinton’s speech was “one of the greatest tours de force in convention history”:

In its intensity, in the palpable love between performer and audience, in its passion, in its earnestness, in its straightforwardness—in its politics, even!—this was the rhetorical equivalent of a Bruce Springsteen concert.

James Fallows at The Atlantic on why Clinton’s speeches succeed: “Because he treats listeners as if they are smart.” That’s a lesson for every speaker and speechwriter.

Update: Lucy Ferriss, writing for the Chronicle of Higher Education’s Lingua Franca blog, takes a close look at some of Clinton’s rhetorical devices:

This call to “listen” to what’s “important” is the chief emendation Clinton makes to a text that might otherwise, rhetorically, echo what not only the First Lady but also the other pundits had been saying from the platform. Even more brilliant is the addition of the “some brass” line, which will haunt our impressions of Paul Ryan henceforward.