« On the Visual Thesaurus: Chips or Crisps? | Main | Word of the Week: Arithmetic »

In celebration of New York Fashion Week, which began yesterday, I present an article of clothing whose name expresses in a single word the blithe mishegas of la mode: the Bolshivek Dress. 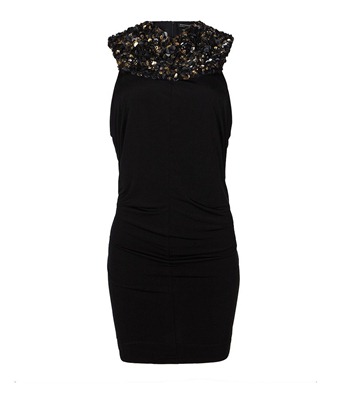 It’s sold by All Saints, which spells it exactly that way and describes it thus:

Rise up, comrades, and recite the list of grievances!

1. It’s “Bolshevik,” not “Bolshivek.” The word means “majority” in Russian.

2. The Bolsheviks were a Marxist Communist party founded in 1903 by Vladimir Lenin and Alexander Bogdanov in opposition to the czarist regime.

3. In the West during the Cold War, to label someone a Bolshevik was to disparage the person’s patriotism, loyalty, and personal hygiene.

4. Nothing about this dress suggests—to quote The Internationale—“workers  of all nations” or “oppressed of the earth.” In fact, the heavy ornamentation and slinky shape—not to mention the $250 price tag—make it seem suspiciously bourgeois if not shockingly aristocratic.

As George Santayana surely would have said, “Those who misappropriate history are condemned to look like ill-informed, trend-besotted twits.”

For extra credit, read “Comradely Capitalists,” my December 2011 post about nouveau commie chic; and my What Were Those Fashionistas Thinking? posts about the Cohen shirt, the Barren skirt, Crazy B#@!h jeans, and oddly named shoes.

Posted at 08:21 AM in Bad Names, Fashion, History, Naming, Russian, Spelling, That Word, They Said WHAT??? | Permalink

Although I agree with your comments on the spelling and relevance of the name, I would point out that 'matt' is the standard British spelling. Matte is generally reserved for the photographic mask meaning (and is probably relatively unknown). In fact, I was surprised to see that my old paper dictionary (Chambers) gives 'mat' as the primary spelling for the dull sense. (Similar comments apply to 'lux', I think.)

Jamie: Point taken about the UK preference for "matt"--All Saints is a UK-based company, after all, although it maintains a separate US website and could easily have Americanized the spelling.

"Lux" is not a synonym for "luxe" on either side of the Atlantic--it's a unit of illumination (or a brand of soap).

Of course it's ridiculous. The Bolshevik dress would have to be a little red dress, not a little black dress!

I can't help thinking of Natasha (of Boris and Natasha, the spies in the Rocky and Bullwinkle show). Though I see now that her (non-sparkly) form-fitting strapless dress was not black but purple.

May I also say that the subtitle "Socialist Surrealism" is one of those priceless Fritinancy touches?

Thank you for another precise and witty post ! ( The comments too)
Yes ! The dress should be red ...with some kind of "hammers and sickles"
pattern .