Remember MEN-trepreneurs, man irons, and manllows? It’s been a while since I’ve reported on a new man-word sighting, but now Brut steps up with its Mantervention Facebook app, in which (according to AdFreak) “some guy with George Michael stubble lectures you about spending too much time on Facebook.” I can’t say for sure, but I’m guessing the Mantervention movie scheduled for 2013 release is about something else.

I have so far managed to resist the 50 Shades of Grey phenomenon—although yes, I am aware there will be a movie—but a display at a local Barnes & Noble store (inner goddess! sex whisperer!) did exert a certain pull. 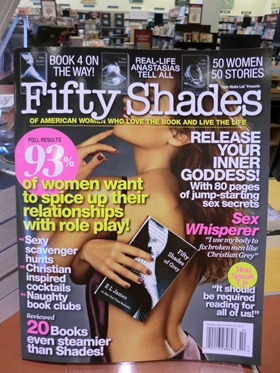 Fifty Shades of American Women Who Love the Book and Live the Life, the magazine, is a must for completists. (For more on “The X Whisperer,” read Jan Freeman’s recent blog post, “Whisperer Campaign,” which covers a lot of ground but doesn’t answer the question “Is a young, sadistic, cranky sex whisperer a sex whisperer-whipper-snapper?”)

If you’ve ever worked on the creative side of advertising or marketing, you’ll laugh through your tears, or weep through your guffaws, at “A Candid Proposal from an Advertising Firm’s Creative Director,” by Andrew Gall at McSweeney’s. One of the imaginary deliverables:

A dozen made up words related to your product that will “draw consumers in.” These shall include, but not be limited to, words with the following suffixes: “-tastic,” “-tacular,” and “-riffic.” Also, while you probably already know this, I was the one who came up with the word “crumbelievable” in 2007 to describe the Keebler company’s new line of coffee cake cookies.

And speaking of crumbelievable and similar madeupical words, Ben Zimmer pointed me to two articles in The Onion that have some fun with FritoLay: “Munchtrosity Created in Fritolayboratory” (“an evil of cheddarclysmic proportions”) and “Fritolaysia Cuts Off Chiplomatic Relations with Snakistan” (the fateful summit was held, of course, in München, Germany).

A tiny pluglet: I’ve been using Pinterest to illustrate some of the naming trends I’ve written about here. Check out my boards: Names That End in –ly, Brand Names with Gratuitous Umlauts, and Shop at X&Y!

There's a 50 Shades MAGAZINE? That is crumbelievable.

Man irons are the same as manacles, right? "Clap him in irons!"