In retail and design, the un also rises. 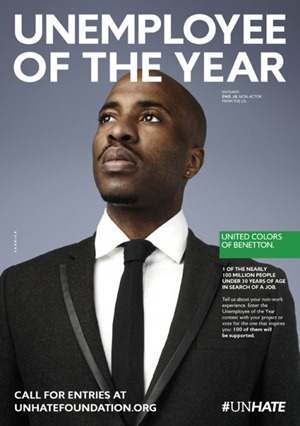 “Unemployee of the Year” is a worldwide contest open to unemployed people age 18 to 30. The contest is part of Benetton’s #UNHATE campaign, which began last year with photos of world leaders kissing. Read more at AdFreak.

Uncrate calls itself “the leading buyer’s guide for men.”

Unbeige is a MediaBistro blog “where designers read about design.” 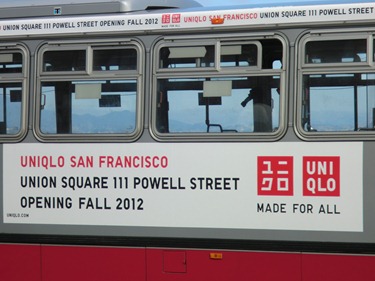 I’m being mischievous with this one — Uniqlo isn’t really an “un.” The low-price, high-quality Japanese retail chain’s name comes from “unique clothing warehouse” and is pronounced “you-nee-klo” in English and “you-nee-koo-ro” in Japanese.

The company is Japan’s leading retailer in terms of sales and profits. The first Uniqlo store opened in Hiroshima in 1985; the first U.S. stores opened in 2005 in New Jersey, but they performed poorly and were shut down. A year later, Uniqlo came back with a 36,000-square-foot store in New York’s SoHo neighborhood, and the company has grown its U.S. presence steadily ever since. The three-story, 29,000-square-foot San Francisco store, opening October 5, will be the chain’s first West Coast location.

According to a recent company profile in the Wall Street Journal, Uniqlo founder Tadashi Yanai is decidedly un-Japanese in his outspoken emphasis on entrepreneurialism. He has even declared English to be Uniqlo’s official corporate language.

Posted at 08:29 AM in Advertising, Design, Japanese, Retail, Un | Permalink

Does this trace back to Toni Braxton ("Un-break My Heart")?

Uniqlo has ads on a Zeppelin that has been cruising Sonoma County recently. The airship promotes two identical reactions for two different reasons: "What the hell is *that?*" both on first sighting, and on making out the trade name and the two red squares. At least the first question is easily answered, but there's no way, without prior knowledge, to figure out what the ad means or where it's from. At first sighting, I thought it was the name of the Zeppelin or the company that owned it.

Marta: Your mention of Zeppelins sparked my curiosity -- I was certain that Zeppelin airships were no longer in use. It turns out that you're almost correct: Goodyear last year announced it was reviving its old partnership with ZLT Zeppelin Luftschifttechnik and would start replacing its fleet of blimps with Zeppelin airships in January 2014. So what you saw was not, technically, a Zeppelin but rather one of the current blimps, probably the Spirit of America.

It's the Eureka, according to story from the Santa Rosa Press Democrat. Unfortunately the photo doesn't show the Uniqlo ad: http://www.pressdemocrat.com/article/20120918/articles/120919542

According to the story , this is the Real Deal, built in Friedrichshafen, Germany. There seems to be some controversy over whether airships that were not built by that factory can rightfully be called "Zeppelins" which, if true, would make the word a trademark -- there are 30 live ZEPPELIN hits in the Trademark Office, only three in Class 12 and these are for bikes and parts, motorcycle seats, and (closest in implication, I think) RVs.

On other hand, Wikipedia uses most of the terms interchangeably in their page on "airships," except that it says that "zeppelin" is a "genericized trademark."

All of which doesn't mitigate the fact that it costs over $375 bucks for a 45-minute cruise, so I guess I'm crossing that off the bucket list.