« Notes from UN-derground | Main | Scratch That »

Here’s a slightly belated quiz in honor of National Punctuation Day. What’s missing from each of these national ads? 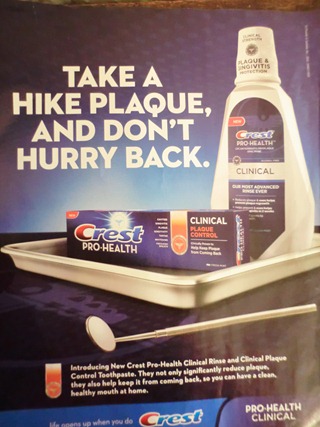 If you said “the comma of direct address” – also known as “the Donner Party comma” – give yourself a standing ovation, sir or madam.

The P’Zolo headline needs a comma after “YA” to make it clear that the word is slang for “you” and not the librarian’s abbreviation for “young adult.” The Crest headline needs a comma after “hike” to avoid suggesting that the reader deserves a wall-mountable award for going the distance on the Appalachian Trail. (Better layout would help, too: the idiomatic “take a hike” shouldn’t be broken up over two lines.)

Who’s at fault? Maybe the copywriter; maybe the proofreader, if there was one. Most likely, a comma-averse art director decreed that an extra punctuation mark would disturb the Platonic perfection of his design. I speak from experience: I’ve had many frustrating conversations with designers and art directors who arbitrarily removed correct and necessary punctuation “because it looked funny.” To which I say: Stick to pictures, bub.

Posted at 06:58 AM in Advertising, Editing, Punctuation, Writing | Permalink

I've been there too.
"Why is the [non-emphatic] 'and' in my headline now underlined and in red?"
"It's a design element." Uh-huh.

Stan Carey has the right idea. Giving short very graphic names to and examples of punctuation clearly demonstrates why it is so important.
Please don't, " Beam me up Scotty".